The cash bail system has big issues, but luckily some positive changes are coming!

It’s no secret that our justice system isn’t perfect. In fact, we have countless articles, news stories, and even TV shows constantly showing us how flawed it is. One problem we see far too often for our clients is difficulty coming up with the cash for bail. Not being able to pay your bond can leave you locked up regardless of guilt. However, Colorado has made some positive changes this year to speed up the process. 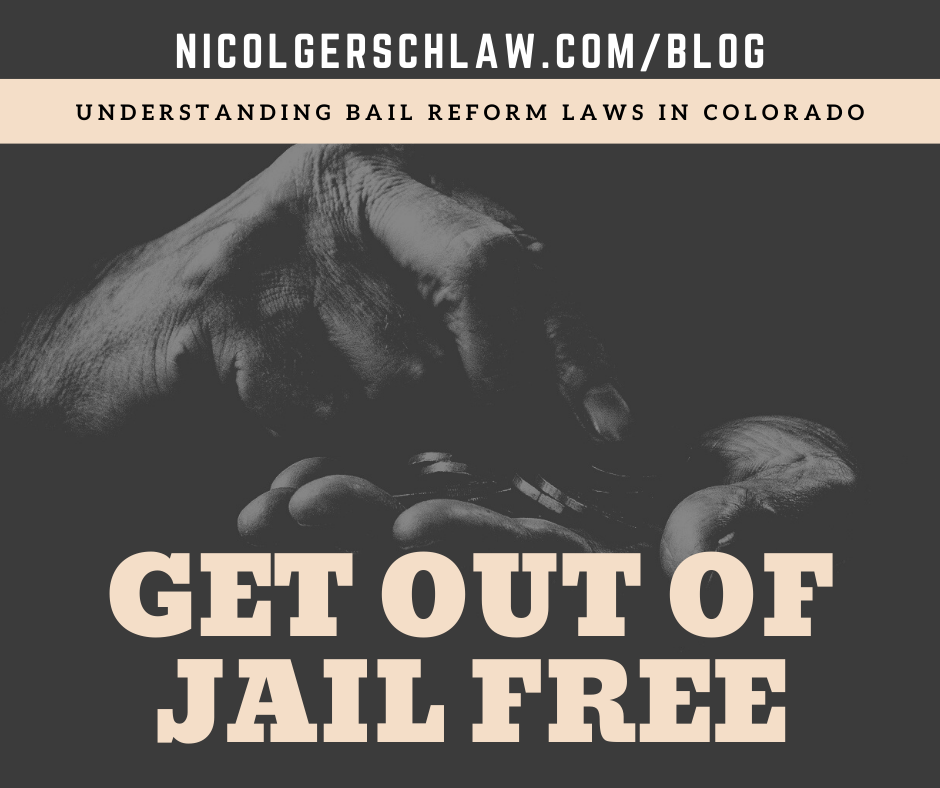 The money bail system was created with good intentions. If you had to put money down to get out of jail, you were more likely to come to your court date to get that money back. However, there are harsh consequences of this system for low-income citizens. This system often leads to wealthier defendants getting released, while poor defendants must stay in jail.

The bail amount is set by a judge. The more severe the crime, the higher the bail is set at. However, there are studies that show other factors are at play. For example, a study in the Quarterly Journal of Economics found that African-Americans were given higher bail amounts than whites, on average. Bail can also be affected by the leniency of the judge – and whether you get assigned a strict judge or lenient judge depends on how lucky you are! And if the judge setting your amount has had a bad day? They’re only human after all, and that may affect their decision to give you a higher bail. Overall, the process is subjective and often favors wealthy, white defendants.

What Happens If You Can’t Pay?

And what happens if you can’t pay your bail? You have a few different options, and none of them are so great. The first option would be to stay in jail and await your trial. This can take weeks, months, or even longer. Many of the people who choose to remain in jail can lose their jobs, and even housing. This is in addition to the emotional distress from being locked away without being proven guilty. In fact, research shows that being held in jail while awaiting your trial means you are more likely to be engaged in criminal behavior or unemployed two to four years later. Even sitting in a cell for a week can destroy the lives of low-income citizens who don’t have paid time off or stable housing conditions.

The other options aren’t much better. Since many people can’t afford to sit in a cell for days or weeks, some have to resort to taking plea bargains to get out. This is regardless of whether or not they have actually committed the crime! We’ve seen situations where both parents are in jail, and one or both of them takes a deal to get out that day because the kids are left at home without care.  This leads to a trend where lower-income individuals are more likely to be convicted, simply because they cannot afford to pay their bail. Another option is to get help from Commercial Bail Bondsmen. These businesses promise the court to pay your bail if you don’t show, which lets you get out of jail. However, you have to pay them 10-15% of your bail amount regardless of the outcome of your case.  This downpayment may never be returned to you (as a cash bond might be) at the end of your case.  What’s more, even a small percentage of the overall bail amount can still be unaffordable for many individuals. These bail-bonds businesses, which are a $2 billion dollar per year industry, profit from poor people and minorities in desperate situations as do other cash services like payday loans.

The cash bail system is deeply flawed, and leads to locking up the poor, regardless of guilt. It can keep poor people poor, as well as keep them in a cycle of criminal activity. It even affects you if you’ve never been arrested –  this system keeps jails heavily overcrowded which costs taxpayers extra money. However, many states are making an effort to change. Cash bail has been eliminated or restricted in Washington D.C., California, New Jersey, and Arizona. There are even positive changes starting right here in Colorado.

The legal argument against cash bail is strong, and nonprofits such as the Civil Rights Corps and ACLU are using it to their advantage. Some argue that unaffordable bail amounts are unconstitutional, and are a violation of due process and equal protection clauses under the 14th amendment. Others argue that letting defendants sit in jail for months or years violates the 6th amendment, which guarantees the right to a speedy trial.

Colorado recently took some positive action of their own. SB19-191, Prompt Pretrial Liberty & Fairness, took effect on 8/2/2019. It required defendants be allowed to post bond within two hours after the sheriff receives bond information from the court, unless there are extraordinary conditions. Additionally, the jail has to release the defendant within 4 hours after bond has been posted. However, this does not apply for cases where the judge has ordered electronic monitoring and the defendant has to be held until fitted with a monitoring device. Even in this situation, defendants must be released within 24 hours. Lastly, this bill requires the court to release the defendant even if they are unable to pay a fee or cost–like a booking fee imposed arbitrarily at the jail–as long as they can meet the terms of the bond. More information about money-saving aspects of this bill can be found in our Recent Laws Reducing the Expense of a Criminal Case blog post.

These requirements ensure defendants aren’t sitting in jail for longer periods of time, which reduces their chances at losing their job and housing and other supportive aspects of their lives. While it’s a good start, we understand these changes can be small for many people. If you are in need of legal advice this holiday season, consider reaching out to Colorado Lawyer Team for a free 30-minute consultation. Find more information at https://NicolGerschLaw.Com or call 970.670.0378 at any time.