5 Things You May Not Know About Family Law

Family law, though a very prominent subject in the legal field, is often surrounded by misconceptions of what the field is and how spouses and children are truly affected. While family law has grown in popularity as divorce cases have risen, there are many things people don’t know about the field. Here are five things you may not know about family law. 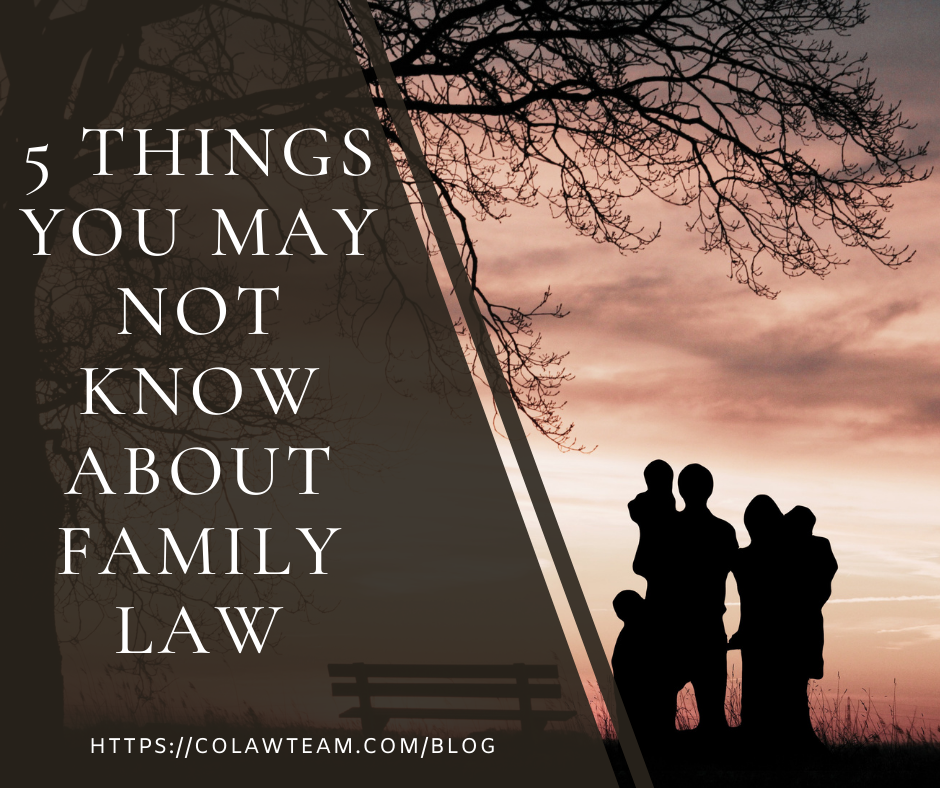 Not only does family law include divorce, but it also includes: alimony and spousal support, pre and post nuptial agreements, child custody, and abuse and neglect proceedings. In Colorado, alimony is called “spousal maintenance” and occurs when the spouse with a higher-earning income makes a payment to the lower-earning spouse so that spouse isn’t destitute during or after the divorce.

As we’ll discuss later, child custody is the legal and physical rights given to a parent regarding their child after divorce, and it can be divided into two categories: joint custody and sole custody. Abuse and neglect proceedings can include attorneys helping parents defend claims of abuse and neglect against their children, or comply in the case to help regain custody of their child.

Although spouses should be treated equally during child custody matters, the most important factor is the best interest of the child. With regards to child custody, there are two types of custody: joint custody and sole custody.

Joint custody consists of two parts: legal custody, the equal rights given to the parents to make major decisions for the child, and physical custody, the amount of time the child spends with each parent. Although this may be equal time, it does not necessarily have to be. The most important aspect of joint custody is that the parents work together to raise their child, especially with regards to legal and physical care.

For most child custody cases, the parents agree on the outcome, and the judge in court finalizes that decision. When parents disagree, the judge must consider the various factors in the case and come to a decision on their own. Some of these factors include: who has been the primary caretaker of the child, and who the child feels more comfortable with.

While the assumption that spouses get to keep everything under their name and split the rest 50/50 is true in most cases, this isn’t the case for everyone. In Colorado, property is divided equitably, meaning the division is fair rather than equal. Often times this does mean equal, but there are many factors that play a role in deciding how property is divided. Some of these include, “…each spouse’s contribution to the acquisition of the property, including contributions as a homemaker” and the “…value of property set aside to each spouse.” Debts are also divided equitably, which means that the spouse with a higher income may assume more of the debt, or the person responsible for incurring more of the debt takes on more of the responsibility.

#4: Not all divorces end up in court

While most people think that divorces inevitably end up in court, there are alternatives that divorcing spouses can choose to pursue. Two options include “mediation” and “collaborative divorce.” Mediation involves a third party, known as a mediator, who aids in negotiation and discussion between spouses regarding mutual agreements. Although mediators often advise spouses to consult with an attorney, attorneys are not present at the face-to-face discussions.

Collaborative divorce involves spouses each hiring a collaborative attorney, who represents and advocates one client, and centers around the agreement that neither party wants to go to court. It also involves other consultants to aid in the divorce process, including a financial specialist and mental health professionals.

When court is not absolutely necessary, other options like mediation and collaborative divorce are great alternatives.

When it comes to a divorce case, most times spouses do not get exactly what they want: between the division of property, child custody, and child support, there’s no true way to “beat” your spouse in court. Divorcing spouses should not get caught up in the legal battle, or else it may lead to even higher legal costs, hostility, and unnecessary hurt for the children involved.

Although many assume that family law solely consists of divorce, there are many other subsections of family law, and many things most people don’t know about. These five things are crucial for those seeking legal help to know about in order to have greater awareness about their case.

Interested in learning more about family law? Check out some of our other posts about it here: