Have you ever seen a car that said “Community Service Officer” and thought, What the hell is that? Us too. There are many different types of uniformed guards that are meant to ensure our safety. These can include police officers, community service officers, privately hired police officers, and civilian security guards. All of these positions serve different interests (public vs. private) and have different levels of authority. 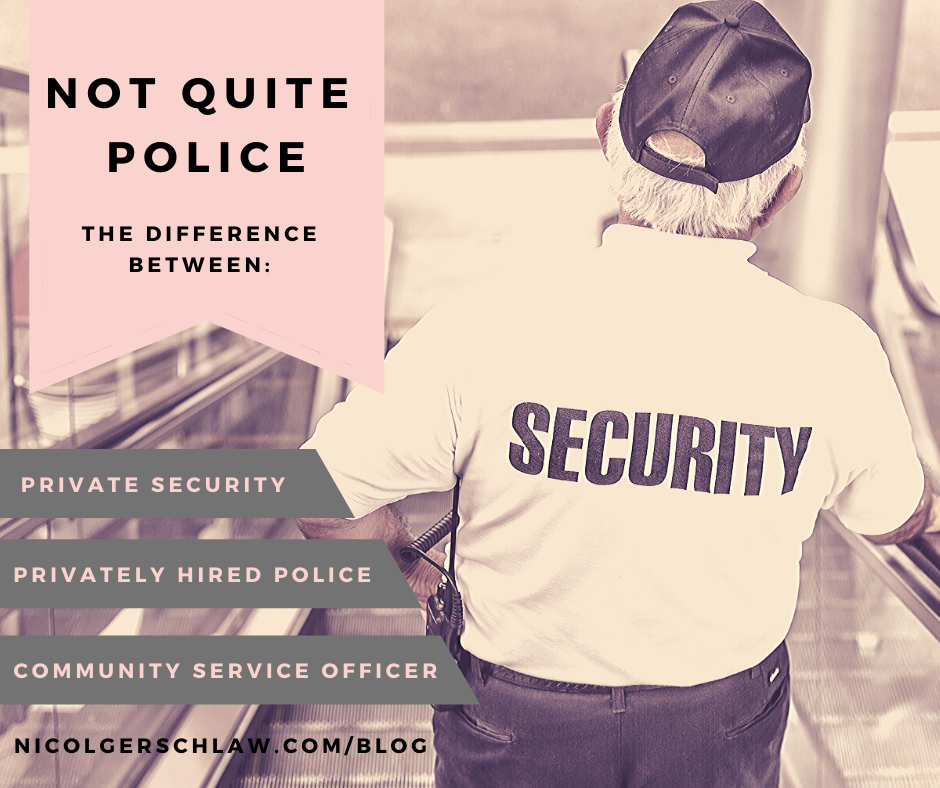 Community Service Officers help law enforcement by working with officers, detectives, and specialty units. Many are young people who wish to eventually become a police officer. They perform a variety of duties that tend to be lower intensity than typical police officers. These include parking enforcement, traffic safety, animal control, lost and found property, working at special events, etc. Some cities, such as Estes Park, hire Community Service Officers seasonally, while larger cities might employ year-round. The requirements and duties of a CSO largely depend on what city they work for. Generally, they must be 21 years old, a U.S. citizen, pass a background check, and pass other examinations. CSOs can vary in their training, between and within cities. For example, some CSOs might have additional training for crime scene investigations that others do not.

One important distinction between police officers and community service officers is that CSOs do not have the authority to arrest you. However, they can write tickets and citations. Most do not carry firearms, but that can vary between cities. Some CSOs are allowed to carry less than lethal weapons such as tasers and pepper spray.

CSOs are not new, and have been around since the 1970s in certain cities. However, they are certainly becoming more popular! Many police departments enjoy hiring CSOs. This is because they are typically paid significantly less than sworn officers, which allows police departments to hire more people. Since CSOs generally handle lower intensity calls that do not require an armed officer, sworn officers are able to concentrate on situations requiring their specific skill set.

It is popular among police officers to take on additional jobs, called “secondary employment,” such as private security. Police officers like the extra money, and it is often encouraged by their department. Some cities coordinate with local employers for officers to work extra hours. To take things further, some cities even charge a fee for coordinating between private companies and their officers. For example, the NYPD gets a 10% cut of their “Paid for Hire” program, where businesses can hire police officers for their services.

So – the officer gets extra money, the city gets extra money, and companies get to hire trained security with police powers. It seems like it works out well for everyone, but this scenario has other implications. Many argue that it’s a bad idea to allow companies to hire police officers. Private entities do not face the same regulations and civil liberties concerns imposed on public police. And what happens if someone decides to sue an officer who was working privately? There have been open questions on whether it is the liability of the police department or the private company.  In most situations, if you are arrested in this “quasi-private setting” your constitutional rights will still apply (right to remain silent, right to be free from unreasonable search and seizure, etc.), but it’s a more complicated case for sure.  Overall, hiring police officers for private means blurs the line between public safety and corporate interest.

Sometimes, when people say rent-a-cop, they are actually referring to a civilian security guard. Private security guards can be found at special events (sporting events, concerts, etc.) and certain businesses like security and loss prevention officers at your favorite department stores. They are not law enforcement and do not have the same powers. For example, private security guards can not arrest you. However, they can make a citizen’s arrest, which is restraining somebody until actual law enforcement arrives. One important distinction is a private security officer can only make a citizen’s arrest after witnessing a crime attempted or committed. This is different from police officers, who can arrest based on reasonable cause, or suspicion of a crime, even if that suspicion comes from anonymous tipsters and without having seen any crime committed themselves.

Private security can legally use weapons such as firearms, a baton, or mace, with the right training and certification. They are only allowed to use these to prevent a serious felony from occurring or to protect civilians in danger. However, whether the security guard actually does carry a weapon depends on their job. Most private security, such as mall cops, would not be certified to carry weapons.

Understanding the authority of so many different security positions can be confusing. If you have questions about your rights or need other legal help, consider reaching out to Colorado Lawyer Team for a free 30-minute consultation. Find more information at https://NicolGerschLaw.Com or call 970.670.0378.