As states continue to legalize more substances, it’s important to understand what these substances are and what role they play in today’s market. Hemp, CBD, and THC are among the many prevalent chemical compounds and plants that have grown in popularity. Do you know the difference between the three? 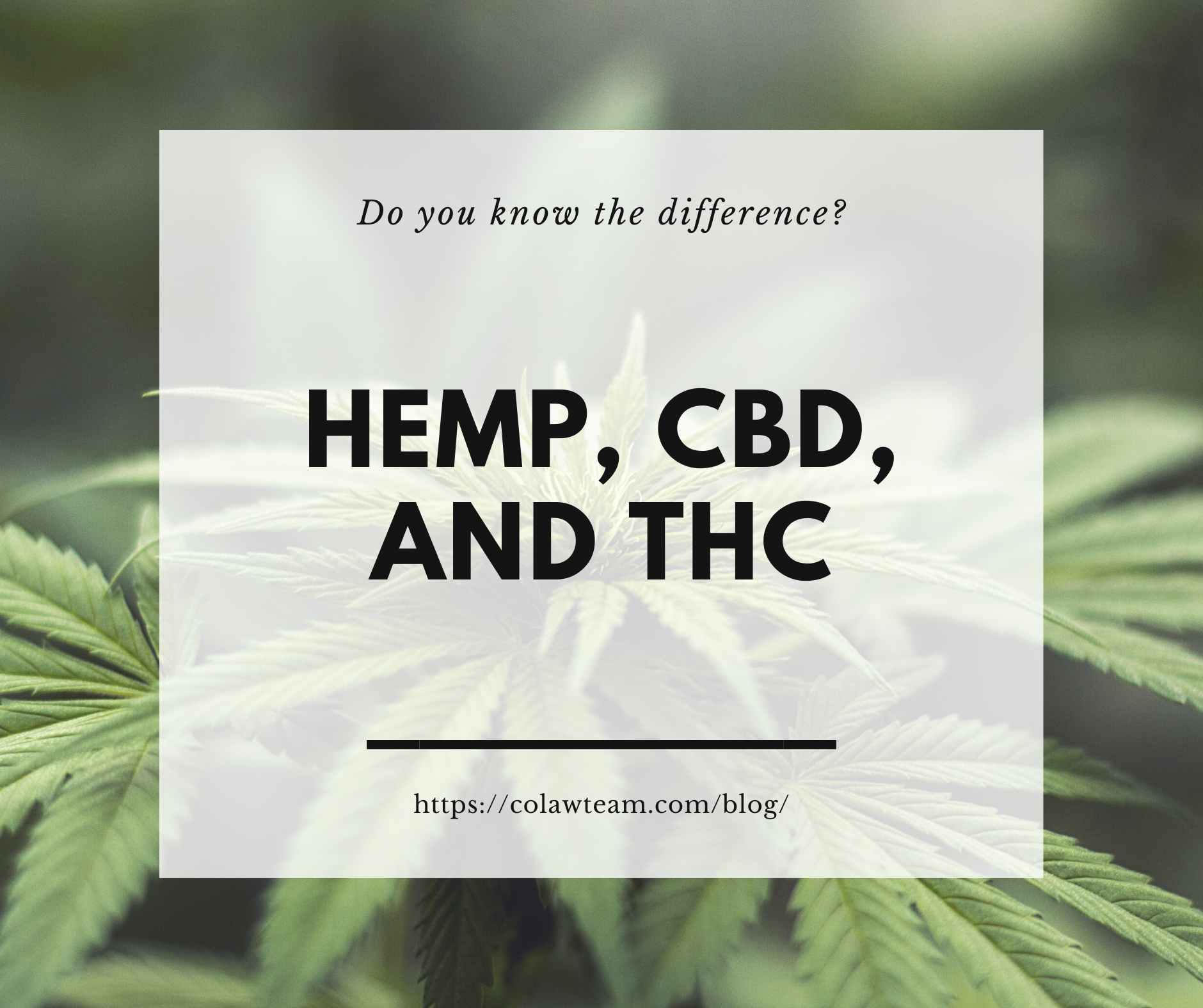 Photo of a Hemp Plant

THC, which stands for tetrahydrocannabinol, is a compound found in marijuana that is responsible for giving people the “high” they desire. It is also in medical marijuana, and its benefits include helping with:

However, it doesn’t come without side effects, which include:

In Colorado, there is a per se limit for driving with active THC in your blood. To be under the legal limit, the driver’s blood must contain less than five nanograms per milliliter of THC. These legal levels relate back to the idea of implied consent, which means that any person who drives a motor vehicle is required to cooperate in the instance that law enforcement requests a blood or breath test relating to probable cause and a possible DUI or DWAI case. Those who refuse to take a test when prompted will face the consequence of this refusal being used as evidence at the person’s trial. However, it will only be used in a hearing without a jury, not in any court action.

Among CBD, THC, and hemp, cannabidiol (CBD) has grown in popularity over the last few years. It is found in marijuana alongside THC and other substances but does not contain any THC itself. CBD is also derived from the hemp plant, which is one type of cannabis plant, but it will not get you high.

Unlike substances from the same family, CBD is used to treat many issues like anxiety, depression, and even symptoms of epilepsy. Another benefit to users is that it is available throughout most of the United States, although its legal status has not been determined on the federal level. This is similar to marijuana in the United States. Colorado also has its own marijuana laws, which you can check out on our website.

In Colorado, the maximum number of marijuana plants a person can legally grow is six. The owner must be over the age of 21, and all subsequent marijuana produced may be kept, but it may not be sold.

Also known as cannabis sativa, hemp is a cannabis plant that contains much more CBD than marijuana but much less THC. While hemp is a drug substance, you won’t get high from it, unlike marijuana, and is mostly used for industrial purposes rather than as a consumable substance. The outer part of the plant, known as bast fiber, is used for paper, rope, and textiles. The inner part of the plant, called hurd or cord fibers, are used to make materials like plastic.

While hemp will not get many the “high” they desire, it is the primary source of CBD. And although both hemp and marijuana contain THC, the hemp plant is not the cannabis plant from which marijuana is made. Because it has very low levels of THC, it will not produce the same psychoactive effects that result from consuming marijuana or hashish, another drug substance.

As far as the legality of hemp goes, both industrial hemp and hemp flower are legal to buy and use in Colorado. CBD flower products are also available to buy, sell, and use rather easily as long as THC levels are equal to or less than 0.3%. Anything over 0.3% THC is considered to be marijuana. Also, under the same law as marijuana plants, Colorado law states than no more than six hemp plants can be grown.

So, What’s the Difference Between CBD, THC, and Hemp?

In short, hemp is the cannabis plant that contains the compounds THC and CBD. The difference between THC and CBD is that THC causes the “high” that people desire while CBD does not. However, both have medicinal benefits if used correctly. So, although these terms may be used interchangeably, there truly is a difference between CBD, THC, and hemp.