Civil Asset Forfeiture: Theft By Any Other Name

Civil asset forfeiture is sometimes known as “policing for profit” and it is a legal tool that allows law enforcement officials to seize property that they assert has been involved in certain criminal activities. You don’t have to be charged with a crime for your assets to be seized, and being innocent does not necessarily mean the government has to return your property.  Yes, this is tantamount to government theft.  You will need to engage a lawyer to navigate the process of recovering your property, and a good Colorado Front Range criminal defense attorney should be able to advise you about taking the team approach to beating both the criminal case and the civil case against you. 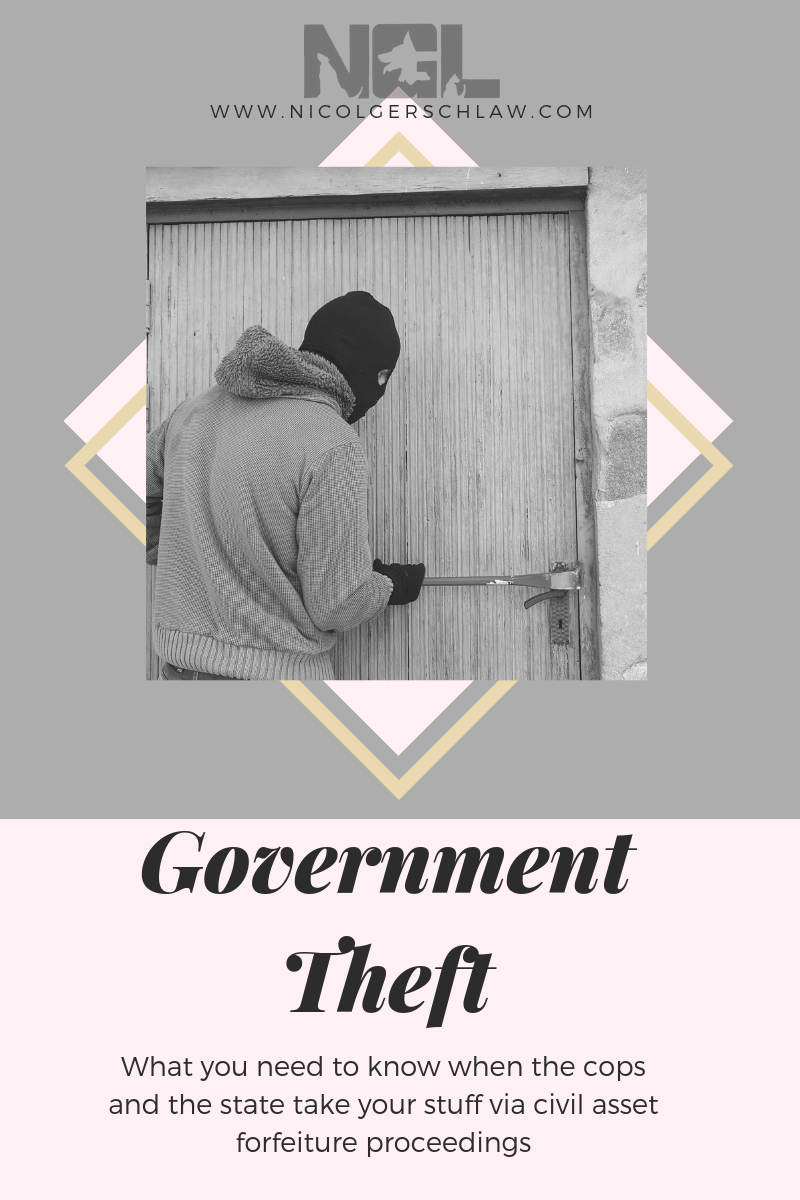 What is the intent of civil asset forfeiture?

The intent of civil asset forfeiture is to cripple large-scale criminal enterprises by diverting their resources. State and Federal agencies seize these assets to provide further funding to fight crime with the proceeds.  But– while that may be a laudable goal– it’s certainly not used in that manner on a day to day basis.  We’ve seen it applied to an elderly individual with no gang ties or any criminal history whatsoever, as well as to a small-time habitual bad driver (yep, Denver took his CAR as a public nuisance and refused to give it back).  It sure seems that local Colorado Front Range governments are indiscriminate in how they’re using this little-known civil lawsuit to steal your property.

Basically, civil asset forfeiture allows law enforcement agencies to seize cash, cars, or other property if they believe it has been used in the commission of a crime.  ANY crime. Even traffic offenses. It is justified primarily on the grounds that it allows law enforcement to seize assets of ill-gotten gains of criminals, such as drug traffickers and their organizations, using the proceeds to fight other alleged criminals. Unfortunately, law enforcement uses it as a way to generate revenue and further “punish” folks who may eventually be acquitted.

When can the government’s theft case start?

In many cases, you do not have to be found guilty– let alone charged– for the police to seize your property indefinitely and put you through costly litigation trying to get it back.  Law enforcement must only suspect that the property has been acquired through ill-gotten means in order to be able to seize it.  Often what that looks like is two court proceedings going on at the same time: 1) the criminal case against someone, and 2) a civil lawsuit to keep them from getting their property or money back.

By way of example, we recently had a client with a DUI who’s car was towed coming back from the casinos.  Because he had marijuana with him (mind you not a small amount, but also no packaging, scales, or other indicia of distribution), the cops took all of his casino winnings as evidence of the crime.  To the tune of $3K!  He was served with a civil subpoena the first day that he went to court on his DUI and was put on notice of the government’s attempted theft while experiencing one of the worst days of his life…

Not only did he have to hire us to help try to save his license and defend against the DUI charges, but now we also had to advise him about maybe spending more than $3K just trying to get his cash back! And he hadn’t been found guilty yet, or even been advised of the charges against him when he was sued by the county for this civil theft. Talk about unfair! Thankfully, we were able to locate a great attorney, who helped him defend against this government-sanction theft on a contingency basis.  It’s important that the civil attorney also works well with us to ensure that the criminal case (and ultimately plea deal) did not affect his ability to regain the $3K in winnings.  Like in all our cases, we prefer to take a team approach to defense.  A good Colorado Front Range criminal defense attorney doesn’t just work for you in court, but outside of the courtroom as well.

What can I do if my assets are seized?

Since asset forfeiture is a civil dispute and not a criminal one, so you are not entitled to the same legal defense protections that are afforded to criminal defendants.  For example, judgment can be entered against you in default if you fail to show up for the hearings (so don’t ignore the subpoena/complaint!).  What’s more is that the civil suit has a lower burden of proof than the criminal case–the government doesn’t have to prove you guilty beyond a reasonable doubt in their civil theft case against you, merely that it’s highly probable (the clear and convincing evidence standard) that your property should be taken as it was used in a crime.  For more on the differences between civil and criminal cases, see our earlier posts here and here.

In addition, you do not have the right to an attorney to represent you for free in civil cases although you do in criminal court.  There are attorneys who will work on a contingency basis, but if you cannot afford an attorney or don’t think to research this type of case, you can be in a world of hurt if you go into court alone.  In any event, you will have to file an answer in the civil court system to request the return of your property and defend against the theft by the government.  You must prove that your property should not be forfeited, basically.  A good criminal defense attorney can certainly help advise you of your rights and responsibilities and help you fill the positions in your legal defense team!

How does Colorado compare in terms of these forfeiture/theft cases?

Although Colorado is certainly not the worst state in terms of theft private property, it’s not the best either.  The Institute for Justice ranks Colorado middle of the pack and gives us a C in terms of how often and how egregious the government conduct in these cases is.  In addition, recent laws have improved transparency in terms of how often and under what circumstances law enforcement is choosing to utilize this method of quelling criminal conduct.  More on Colorado’s reporting system and requirements can be found here.  Now, agencies are required to report such cases 2x a year every year and they face fines for failing to do so timely and effectively.  For 2018, almost 450 of these cases were used to take almost $12 million in assets (see the complete list).  Don’t be a statistic, know your rights!

Let Justie and Jenn help you defend against government theft and the criminal case today!

Call a seasoned criminal defense attorney at Colorado Lawyer Team today for help with your case and advice about what to do if the cops take your stuff. We are ready and able to help you with these cases, and our staff can book you for a free consult any time at 970-670-0738.