The general election season is upon us, and this year there seems to be more confusion than ever about what is allowed when it comes to voting. We’re here to help you get it right! In this two-part series of articles, we help you navigate the upcoming election, understand some top-of-mind election crimes in Colorado, and stay out of trouble. 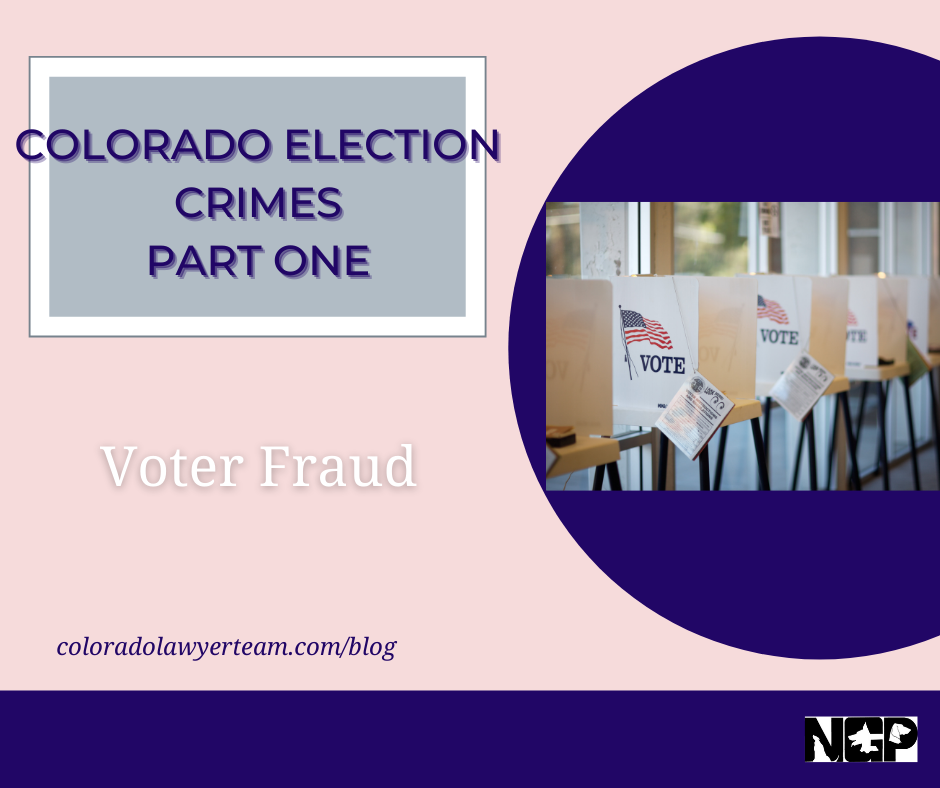 This year, the volume has been turned up on claims of voter fraud. There has also been a national discussion about the legitimacy of mail-in ballots given that more states are turning to mail ballots due to COVID-19. Colorado happens to be a leader in the nation when it comes to mail-in voting, so we’ve got a track record to draw from when looking at the realities of voting by mail.

First, let’s take a look at a few illegal activities associated with voter registration. In Colorado, it is unlawful to obtain a false voter registration. This situation could occur where someone who is ineligible to vote is able to successfully register to vote using false information. For instance, someone who is not yet the legal age to vote – which is 18 years of age for a general election in Colorado – could falsify age information to procure his or her voter registration. Or, a person who is not a United States citizen and is, therefore, ineligible to vote, could theoretically falsify citizenship status and register to vote.

Finally, to be eligible to vote in Colorado, a U.S. citizen at least 18 years of age must also reside in Colorado for at least 22 days immediately prior to the election date. Falsifying residency information could lead to an unlawful voter registration, too.

Next, a person who is eligible to vote in Colorado could engage in illegal activity at the time of casting a ballot. For instance, a voter could cast more than one ballot, which is understandably prohibited by law. Or, an eligible voter could tamper with someone else’s ballot, which is also a crime under Colorado law. When it comes to mail ballots, it is an offense to falsely make, alter, forge, or counterfeit a mail ballot before or after it has been cast. Of course, destroying, defacing, mutilating, or tampering with the mail ballot is also punishable.

There are many more rules relating to unlawful voting and election activities, but these are a few of the crimes which are top-of-mind this election season.

Penalties for unlawful activity relating to voter registration, voting more than once, and interfering with mail ballots can include a fine of up to $5,000.00, or imprisonment in the county jail for up to 18 months, or both.

Suspected cases of voter fraud are typically referred to the appropriate District Attorney’s office or to the Colorado Attorney General for investigation and prosecution. If a person is suspected of having engaged in illegal election activities, that person is likely to need representation by a criminal defense attorney in order to defend alleged election crimes.

How Common is Voter Fraud in Colorado?

While voter fraud is certainly possible, the reality is that these particular types of election crimes in Colorado are very rare.

In Colorado’s 2018 general election, the referral rate for potential double voting and further investigation of other suspected issues was 0.0027 percent of all ballots cast that year, according to Colorado’s Secretary of State, Jena Griswold. That figure is equivalent to 62 ballots out of 1.5 million ballots cast.

And, another study conducted following the 2016 general election revealed 48 instances of possible improper voter conduct in Colorado. The study looked at the voter records of five states, including Colorado, totaling 11.5 million voter records. Of the nearly 2.9 million votes cast in Colorado in 2016, a mere 0.0016 percent of those ballots were suspected of being problematic. The 48 potentially problematic cases included 10 people suspected of voting twice in Colorado and 38 people suspected of voting in both Colorado and one of the other four states involved in the study.

While the kinds of voter fraud discussed here appear to arise infrequently, we all should understand the requirements to vote legally in our elections and help others do the same. And, in a super-charged election season in which the legitimacy of our elections is being questioned by some, it serves us all to know the facts about how uncommon these kind of election crimes actually are.