In the midst of the Coronavirus pandemic that rapidly gripped our state earlier this spring, Colorado quietly enacted trailblazing legislation eliminating Columbus day as a state holiday in Colorado and replacing it with Frances Xavier Cabrini day. 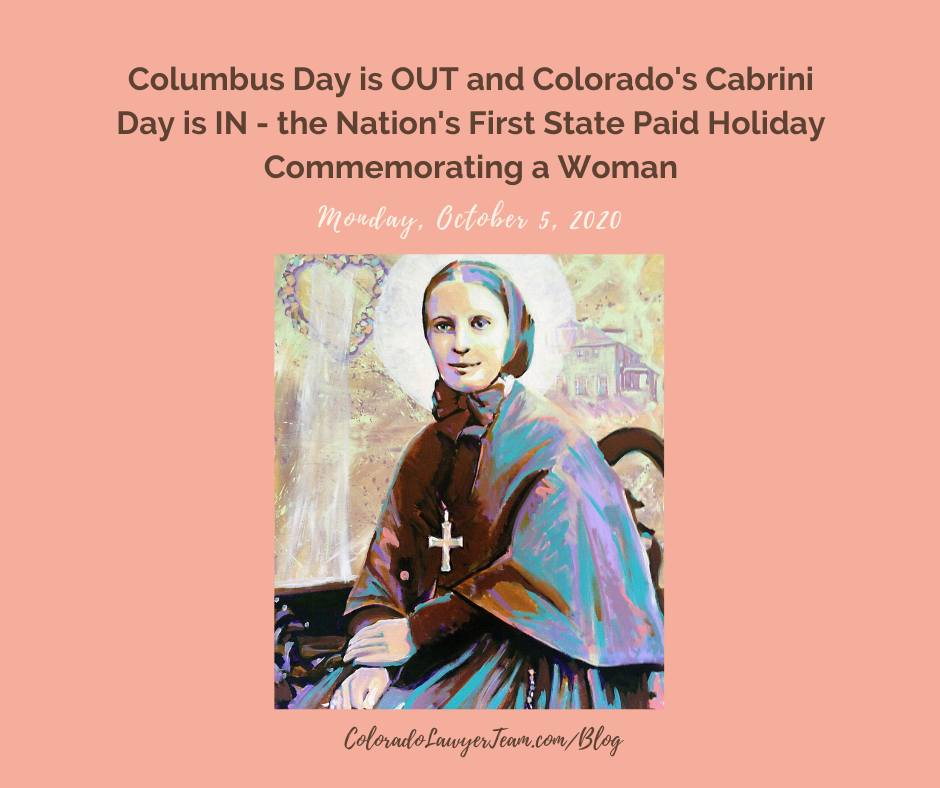 Beginning today, October 5, 2020, Cabrini day will be observed annually in Colorado on the first Monday in October. On the heels of saying goodbye and thank you to Ruth Bader Ginsberg – a woman who contributed tremendously to the lives of countless Americans through her legal genius, courage, and tenacity – we are grateful for Colorado’s progressive action to celebrate another woman who, like RBG, was a giant in her time.

Frances Xavier Cabrini was an Italian-American born on July 15, 1850. As a Roman Catholic nun, Cabrini traveled the world establishing schools, orphanages, hospitals, and other institutions to help the poor, the sick, immigrants, and others in need. In the United States, Cabrini established these institutions in major city centers, such as New York, Chicago, Seattle, New Orleans, Los Angeles, and Philadelphia.

At the time of her death in 1917 at the age of 67, she had founded equally as many institutions to help those in need – one for each year of her life.

She is known in many parts of the world as a champion of immigrants and children. In 1946, Cabrini became the first United States citizen to be canonized as a Saint by the Roman Catholic Church.

As one would expect, Cabrini’s many contributions touched Colorado, too, sowing the seeds for Cabrini day. She first arrived in Colorado in 1902 to visit Italian workers and their families located in various mining districts in the state. Cabrini went on to open the Queen of Heaven Orphanage for girls in north Denver in 1905. Four years later, Cabrini secured rural property on Lookout Mountain in Golden to serve as a summer camp for the girls living in the Denver-based orphanage. Unfortunately, the land had no reliable source of water at the time, which created hardship for the early years of the camp.

During Cabrini’s last visit to Colorado in 1912, she stayed at the Lookout Mountain camp with the girls, who were still struggling with the lack of available water. Cabrini’s solution to this problem?

She answered, “Lift that rock over there and start to dig. You will find water fresh enough to drink and clean enough to wash.”

Low and behold, beneath the rock was a spring of fresh water, which continues to provide water to the property to this very day.

The Mother Cabrini Shrine in Golden, Colorado is open daily to visitors. Consider paying a visit and walking the grounds once visited by Cabrini and the girls of Denver’s Queen of Heaven Orphanage.

In the legislation signed into law by Governor Polis on March 20, 2020, the general assembly found and declared that “[a]lthough Christopher Columbus is recognized as a voyager who arrived in what is now known as the Caribbean Sea, he never traveled to or entered into the territory that became the United States. He had no knowledge of or contact with the area now known as the state of Colorado, providing no rationale for a Colorado state holiday in his name. In 1492, he was welcomed by the indigenous Taino people to their homeland on the island of Quiqueya, which Columbus renamed Hispaniola. Fifty years later, the Taino people had been nearly exterminated by Columbus and his successors.”

Hm, that’s not a particularly ringing endorsement for old Columbus.

In contrast, the law recites the positive humanitarian contributions made by Frances Xavier Cabrini, including those unique to Colorado. Lawmakers also noted that the land chosen in Golden for the girls’ camp is the traditional territory and homeland of the Cheyenne, Arapaho, and Ute indigenous nations. They go on to state, “[t]hose indigenous peoples, and all indigenous peoples, have a special, sacred relationship with water, similar to that of Cabrini.”

Colorado’s legislature was determined to preserve the number of state holidays while also commemorating Cabrini’s contributions to the state of Colorado. Lawmakers declared that commemorating Cabrini’s contributions “creates an opportunity to promote an appreciation, tolerance, and understanding of the different cultures that make up our state.” And, with the stroke of Jared Polis’ pen, Columbus was relieved of his holiday duty and Cabrini was elevated to her rightful spotlight in Colorado history and in our minds.

In the midst of a turbulent period of social tumult and unrest in this country, a new government holiday that sheds light on both the contributions of women and different cultures in weaving the fabric of our great state is a welcome breath of fresh air.

May we all take a page out of Cabrini’s book and be a little kinder and more compassionate to others. Perhaps the first Monday of each October will remind us to dig in and continually find ways to improve the communities we call home.