Pandemic Pets: Are Dogs Getting Returned?

Although adopting a pet became a 2020 trend during the pandemic, now that restrictions are being lifted across the country, and life is slowly returning to normal, will some new dog owners decide to return their pets? 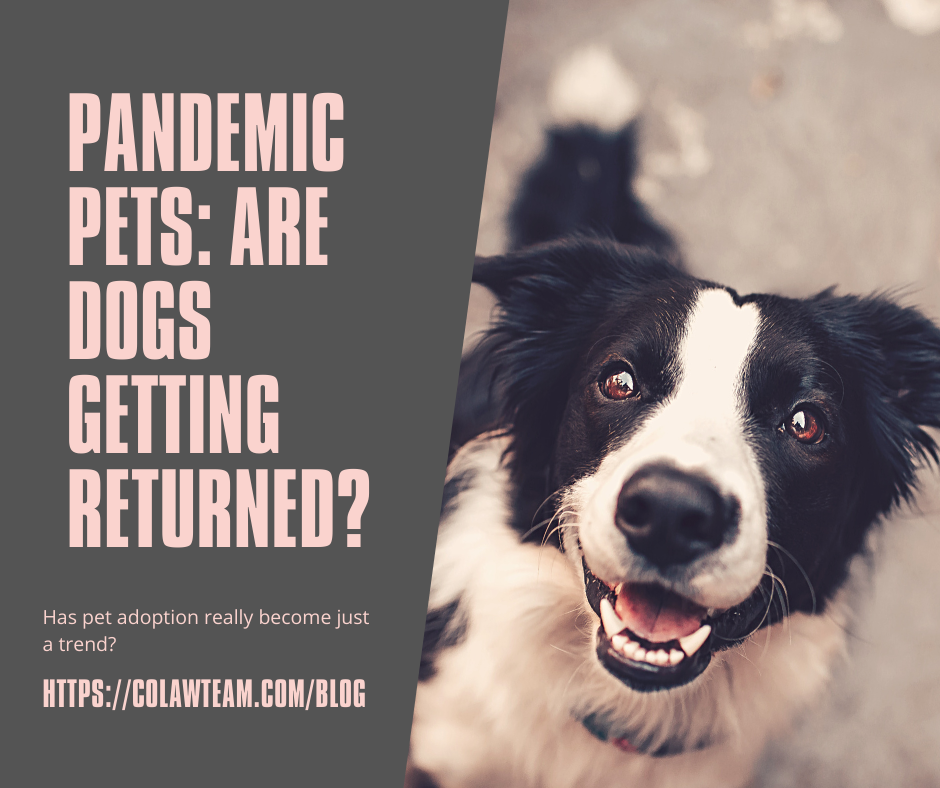 How Does Returning a Pet Affect It?

To some, returning a pet can be extremely difficult. Whether it’s because they’re too expensive, or they just don’t have the time, going back on the decision can make them feel guilty. To others, however, they may think nothing of it. It may just be a passing trend that’s become all the rage as the pandemic began to bore them. However, to the pets being returned, it is a traumatic experience that can’t easily be shaken. The main reason for this is that pets easily get into a routine: they have their own space, their own people, and their own schedule that they follow. When they’re rehomed, all of this goes away, and they’re thrown into a world of chaos as many return to the shelter.

Pets who are rehomed also tend to be older, and older pets have a one in four chance of being adopted again. If these returned dogs aren’t adopted again, they may be euthanized. Ashley Roberts, a manager at Lucky Dog Animal Rescue in Virginia, echoes the idea of dogs having a difficult time adjusting to their new, unwanted life, saying, “It’s really scary for them.” She even added that one owner traveled all the way from California to Colorado to give their dog back because they believed the dog was uncontrollable.

So, how did this boom in pet adoption even come to be? Well for starters, millions of people had to stay home during the lockdowns in March and April, and after that, the transition into working from home and online school left many people lonely, bored, and longing for a companion. Executive director at Moms and Mutts Colorado Rescue Aron Jones said she “couldn’t rescue enough dogs to meet the demand.” There were even some breeders who had waitlists extending well into 2021 back in March.

The first wave primarily consisted of people fostering dogs and adopting them before the shelters shut down. However, after people realized the pandemic wasn’t going anywhere, that’s when adopting a dog began to take off. While it’s great that many pets have found a forever home because of the pandemic, it begs the question: are all dogs adopted during the pandemic going to stay at their homes forever? Was the drive to adopt a dog accompanied by love, hard work, and dedication, or simply the desire to have a someone else in the house while people worked from home?

Are People Really Returning Their Pets?

There are some articles, like from the New York Times, claiming that people aren’t returning their pets at an alarming rate. However, the general consensus seems to be yes… and no. While some shelters are seeing an increase in return rates for pets adopted during the height of the pandemic, there are just as many shelter that aren’t. At the Animal Humane Society, researchers have found no significant increase in return rates over the past year. Even the ASPCA (The American Society for the Prevention of Cruelty to Animals) found in a national survey that, “Despite alarmist headlines tied to regional reports of a surge in owner surrenders, this trend is not currently evident on a national level with many organizations simply seeing a return to pre-pandemic operations and intake.”

So, yes, it’s true that regionally, adoption rates may be increasing, but on a national scale, everything seems to be normal. The ASPCA suggests that during these difficult times, people want pets to cherish rather than spend time with when they had nothing else to do. In a survey of about 5,000 pet owners in the U.S., the majority of respondents said they were not considering rehoming their pets in the near future.

So, What Does This Mean as Far as Returning a Pet?

Although returning a pet to the shelter is not as big of an issue as headlines are making it out to be, we shouldn’t pretend like it’s not an issue at all. It’s just as important now as pre-pandemic to love and look after the animals you make a commitment too. Pets can add so much more meaning and happiness to our lives: we just have to love them as much as they love us.

Be sure to check out one of our previous articles about National Pet Day and Animal Cruelty Prevention Month here.