The Time Commitment, Cost, & Legal Implications Of Pleading Guilty, Not Guilty, & No Contest

When arrested for a crime, you have a few different options on how to proceed – taking a plea deal and agreeing to plead guilty or no contest, or pleading not guilty and going to trial. Each one has a very different time commitment, financial cost, and legal implications. 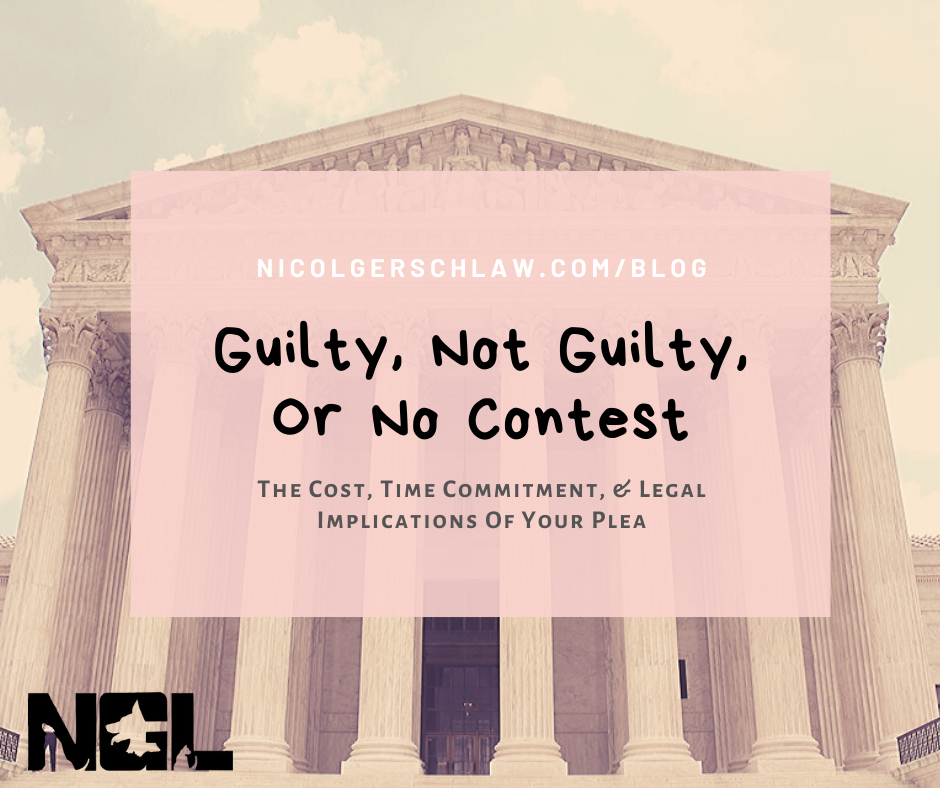 A plea bargain is an agreement between a defendant and a prosecutor, where the defendant agrees to plead guilty (or no contest) in exchange for dropped charges, reduced charges, or a reduced sentence. Plea bargains are incredibly common, in fact, more than 90% of convictions are from negotiated pleas. They are a popular option because they offer benefits to both lawyers and the defendant. Criminal courts are overcrowded, and criminal trials can take days, weeks, or even months. This is why prosecutors and judges feel the need to move cases through the system quickly – hence, plea bargains! A guilty plea can be arranged quickly and without the need for a trial.

Defendants also benefit form plea bargains. For starters, it allows them to have some control over their case. When you go to trial, you have won’t know what your sentence will look like if you’re found guilty. With a guilty plea, you know exactly what you’re getting yourself in to. Also, you can eliminate some of the risk that comes with going to trial, and potentially being found guilty AND given a harsher sentence.  In addition, many pleas may involve the option to seal the case immediately upon completion. That paired with the collateral consequences or risks of a conviction at trial, can often lead to even innocent people pleading guilty in order to control their fate.

Another benefit of accepting a plea bargain is that you might be able to get out of jail quicker. This is sometimes the only option for defendants who need get out of jail immediately in order to keep their job or housing status. For more information about that decision (and how unfair it is), see out blog post on Colorado Bail Reform. Plea bargains can also alleviate some of the financial cost of the court process, as you won’t have to pay a lawyer to go through trial with you, and you can usually avoid the costs of an expert or investigator that would be necessary at trial.

Legal Implications of Accepting a Plea

The legal implications of taking a plea bargain with a “straight conviction” (not a deferred judgment, diversion, or deferred prosecution sentence) are the same as if you were found guilty after trial. The conviction will show up on your criminal record, and you will still lose any applicable rights, such as the right to vote or own a gun if it’s a felony matter. However, depending on the bargain, you may be able to still seal your criminal record at a later time. And, in fact, some drug felonies automatically “wobble” down to a misdemeanor drug offense without any further action taken on your part (besides staying out of trouble).

There are some different types of bargaining. These include:

Charge Bargaining: The defendant pleads to a crime that is less serious than the original and waives a factual basis for the new charge in order to take advantage of the deal.

Count Bargaining: The defendant pleads to one or more of the original charges, and the rest are dropped.

Sentence Bargaining: The defendant pleads guilty or no contest on the agreement that the prosecution will recommend a specific, agreed-upon sentence. Some courts will accept stipulated sentences, some will not, and some will only accept “caps” on jail. Knowing the jurisdiction you’re in is crucial.

Fact Bargaining: The defendant pleads in exchange for the prosecution omitting facts that would have increased the sentence.

Prosecutors and judges sometimes agree to a “No Contest” or “Nolo Contendere” plea. These have the same consequences as a guilty plea, but the defendant doesn’t actually admit guilt. The defendant will still receive a conviction and accept some sort of punishment. Additionally, it will still appear on their criminal record and they could potentially lose the same rights. It’s also still viewed as a guilty verdict in the eyes of future employers, landlords, etc.

Pleading not guilty will start the trial process, which can be long and costly. It also starts the clock for speedy trial to begin running.  Some courts automatically enter a not guilty plea at your first appearance (municipal courts, I’m looking at you).  Other times, you have to specifically say not guilty.  In many types of cases, you may even be required to pay a jury trial fee before being entitled to a jury of your peers.  In all cases, though, the DA’s have 6 months to try the case.  In our experience, winning a case on speedy trial is even more rare than a no contest plea, but getting close to deadlines may be beneficial anyway–if victims or key witnesses cannot be served and no more time remains on speedy trial, for example, cases may have to be dismissed even if a court would normally have granted the people’s continuance.

There are risks and benefits associated with going to trial. We like to approach any trial as a team effort and thoroughly prepare your case with your help.  If you’re found innocent at trial, you can put the whole thing behind you! The downside is if you’re found guilty, you will often serve a harsher sentence than if you had taken most plea deals. Later this month we’ll be discussing certain aspects of trial such as jury selection, different types of evidence, and expert witnesses.

If you need legal advice on a case, or need help understanding your options, consider reaching out to Colorado Lawyer Team for a free 30-minute consultation. Find more information at https://NicolGerschLaw.Com or call 970.670.0378.