The Past, Present, & Future of Drug Sniffing Dogs

It’s no secret that here at Colorado Lawyer Team, we LOVE animals. And since we work from home almost all of the time, our pets really are our furry coworkers! Our love for our dog colleagues inspired us to write about some other known canine employees – drug sniffing dogs. After marijuana was legalized in Colorado, police departments had to adjust the way they train and use these police dogs. In 2019, the Colorado Supreme Court ruled that a dog trained to find marijuana cannot be used to justify a search before an officer establishes probable cause. 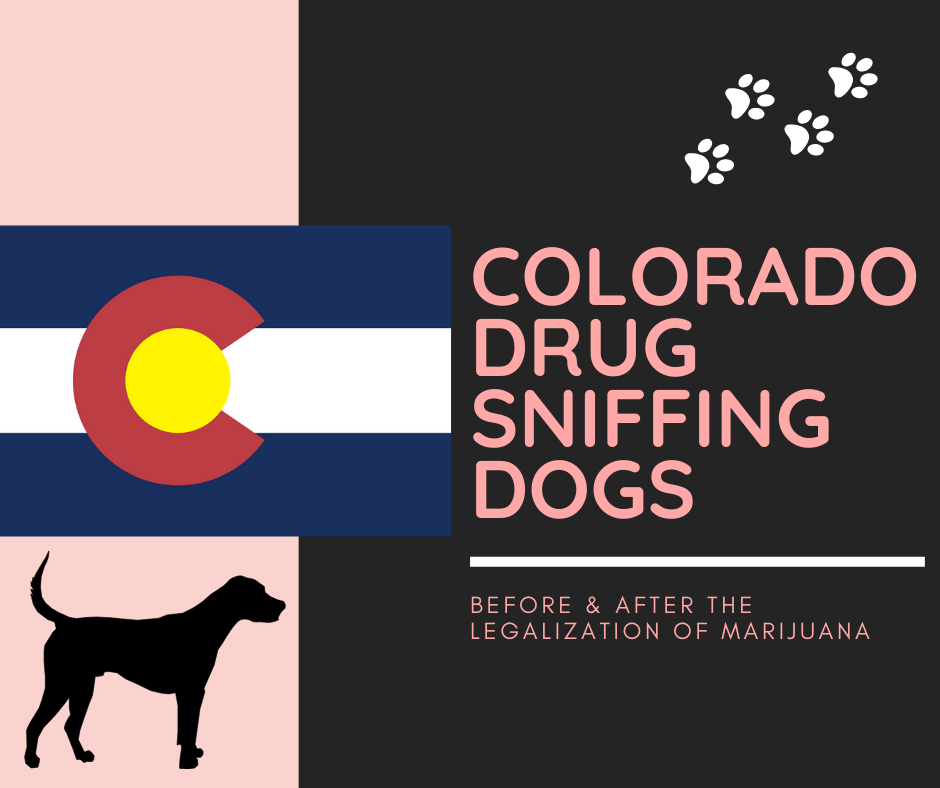 How Drug Sniffing Dogs Are Trained

After Colorado legalized marijuana, some police departments had already begun train new dogs. And to understand why they had to train entirely new dogs, you must understand how drug sniffing dogs are trained in the first place. Police dogs are not trained to differentiate between the types of drugs they are taught to detect. So, if a police dog has been trained to alert to marijuana, cocaine, and heroin, and detects one of these in a car, the officer will have no idea which one may be present. This raises an issue, because in this situation there is no way to know if an officer has probable cause to search a vehicle, since the dog could potentially be smelling legal marijuana.

A similar situation occurred to Kevin McKnight. In 2015, Kevin McKnight was arrested after a police dog alerted officers of drugs inside of McKnight’s truck. Officers found a pipe with methamphetamine residue, and McKnight was convicted on two drug possession charges. McKnight appealed this sentence, based on the argument that the search was illegal. He justified this by saying the police dog could have been alerting officers to the pretense of legal marijuana, and officers did not otherwise have enough evidence to conduct a search. In 2019, the Colorado Supreme Court agreed. They ruled that a dog trained to alert marijuana cannot be used before an officer establishes probable cause.

This Colorado Supreme Court decision limited the usefulness of drug sniffing dogs who were already trained to detect marijuana. Many of these canines were able to retire early. However, police departments still keep about 20% of their dogs to have marijuana training. These dogs can still be used if:

Most police departments, especially the larger ones, had already started training new police dogs before this decision, as this outcome was largely expected. One consequence of this decision was the strain put on small departments, who might not have had the resources to get a head-start on training.

This decision is important, as it preserves your 5th Amendment right that protects against illegal search and seizure. For more information about this right, see our blog post Dealing With Police. The outcome of the People vs. McKnight case might also have ramifications in the future, if Colorado decides to legalize hallucinogenic mushrooms. In 2019, this substance was decriminalized in Denver, which made it the lowest priority for Denver law enforcement. Fortunately for them, Denver police dogs were not already trained to detect this substance, so no new canines were needed. However, Fort Collins Police Services has already announced they are preparing for the decriminalization or legalization of other drugs, and changing how the agency trains incoming police dogs. This could mean that Fort Collins will stop training their new dogs to detect hallucinogenic mushrooms, with the expectation that the drug could be legalized within these dog’s lifetimes.

If you have questions about your 5th Amendment rights, or need other legal help, consider reaching out to Colorado Lawyer Team for a free 30-minute consultation.