If there are two things in life we’ve come to know are extremely difficult, it’s surviving a pandemic – and divorce. Let’s be honest, even without the pandemic, life is still hard. But enduring a global shutdown and withstanding COVID-19 has increased the economic and social pressures of issues like finances, religion, and politics. Why do these topics lead to divorce, and how does a suffering economy make them worse? This is what we aim to discuss in our third blog post about the economy. Check out our previous posts here. 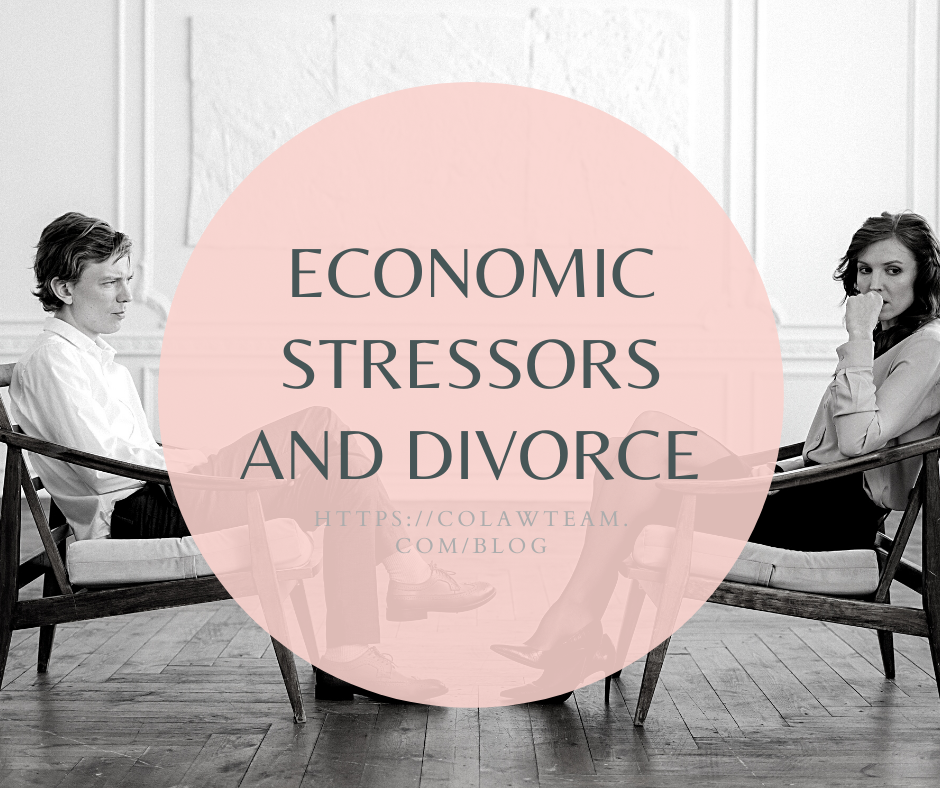 How has COVID-19 Affected Divorce?

It’s easy to understand why the start of the pandemic was accompanied by divorce and marital frustration: millions of people have lost work due to COVID-19, have been forced into tight confinements because of the lockdown, and have lost people closest to them because of the virus. Whether it becomes little things like forgetting to take out the trash, or bigger things like financial insecurity, couples have found it hard not to stress about their relationship during COVID. The American Family Survey polled 3000 Americans and found that 34% of married men and women had an increase in marital stress due to the pandemic. These rates were highest among those who faced financial hardships because of the pandemic as well.

However, amongst all the tension lies the fact that divorce rates aren’t increasing at all. In fact, they’ve even begun to fall over the last year. So, this information begs the question: why have divorce rates fallen? The first and most obvious reason is because fewer people are getting married. It makes sense that the fewer married people there are, the fewer people are likely to get divorced. The second reason is that lockdowns have prevented spouses from filing for divorce. The Institute for Family Studies suggests that there may be a period after the pandemic ends where divorce rates rise. However, they also note that the decreasing trend is likely to continue over the next decade.

The last important and perhaps most positive reason for lower divorce rates is marital commitment and stability. In another survey conducted by the American Family Survey found that 58% of adults said they grew to appreciate their partner more because of COVID-19. 51% of married adults also said that their connection and commitment to their partner had deepened.

The Connection between Divorce and the Economy

So, how has the economy and its worsened state affected divorce? Some of the biggest areas we see marital stressors are finances, religion, and politics.

In a survey conducted by Ramsey Solutions, researchers found that arguments over finances are the second leading cause of divorce, the first being infidelity. Within this idea of fighting about money, the main reason couples fight about money is because of debt. In this same study, researchers also found that the amount of debt a couple is in can play a huge role. The bigger the debt, the more of an issue it is in the marriage.

“Almost half of couples with $50,000 or more in consumer debt say money is a top reason for arguments. Those who say they have a ‘great’ marriage are almost twice as likely to talk about money daily or weekly compared to those who say their marriage is ‘okay’ or ‘in crisis.'”

But doesn’t every couple experience debt on some level? Well, two-thirds of marriages do start out in debt, but those who have debt greater than $50,000 generally have more anxiety when it comes to discussing their finances. Also, nearly all of people who say they have a great marriage discuss not just their financial insecurities, but also their dreams when it comes to money.

There’s no question that COVID-19 hasn’t made financial insecurities any better either. The start of the pandemic was accompanied by lockdowns, job loss, and uncertainty as to whether the economy was going to recover from the impacts of the pandemic. In an earlier blog post about the economy, we discussed the economic impact of COVID-19 on the United States. Essentially, the U.S. unemployment rate saw an increase as high as 14.8%, which eventually lowered back down to 5.4% in July of 2021. This is important because as the demand dropped for goods and services, the need for employees dropped as well. Although there were unemployment benefits and government aid, this alone couldn’t stop couples’ arguments about money.

It goes without saying that politics is a highly debated subject, one that has only become more polarizing in the last few decades. Marriage and family therapist Stephen J. Betchen says that he encounters couples in treatment who have had “serious arguments” over politics. In his article, “When Couples Fight About Politics,” Betchen says that although fighting about politics can be just that, it can also mean something deeper.

“But on the occasion that a couple presents a seemingly unresolvable issue, their dynamic may be symptomatic of a deeper issue. For example, if a couple is chronically arguing about politics, it could be representative of a wish to be with someone who shares their perspective on life—someone more compatible in general.”

Betchen goes on to discuss helpful advice for overcoming disagreements about politics in relationships. From this advice, we can see how couples who don’t abide by this knowledge may end up divorced. For example, Betchen recommends being more optimistic about each other’s political opinions, trying to learn from one another by listening to what they believe in, and most importantly, taking a step back when things get heated in order to calm down and better understand your partner.

Similar to politics, religion can be a difficult subject matter to openly discuss with others. Religion and politics can also be intertwined in a way. For example, the recent abortion ban in Texas has sparked heated debates over whether this invades a person’s privacy, but it also brings up the morality of abortion. This, like many other political topics, can split religious individuals down the middle. Even how we talk about religion is debated. In a study conducted by Lifeway Research, researchers found that six out of ten Americans prefer to discuss politics over religion, and most don’t even want to talk about religion at all. On the other hand, evangelical Christians predominantly prefer discussing God and religion over politics.

In a 2016 Pew Research Center study, researchers found that in 78% of married couples who were religious, both partners were part of the same religion. Within these marriages, partners say they discuss religion “a lot” or “some” of the time. This idea of strong religious communication is at the core of many marriages, and just like politics, arguments are bound to come up when two people disagree about something. Marriage-ending conversations or not, this can take a toll on the couple and can lead to greater arguments further down the road.

How Can You Prepare Yourself for Divorce?

Unfortunately, we can’t always stop divorce especially when issues like finances, politics, and religion are sometimes too much to handle. So, is there anything people can do to prepare them for the divorce? The answer is yes, there is, and there are some things that are crucial to know beforehand. As a note, this topic is something we discuss in one of our most recent YouTube videos, which you can check out here.

The first and most important thing is to speak to an attorney before you file for divorce. When you start to file for divorce, there are several factors that need to be considered as you proceed. One of these is that a temporary injunction goes into effect automatically when the case begins. With this injunction, there comes some restrictions on things you can do related to your marital estate and financial situation, like making changes to insurance polices or concealing or dissipating assets. Unfortunately, this is something we often see, so keep in mind that this injunction goes into effect automatically.

It’s also crucial to know what to do and not do before actually filing for divorce. Something that’s not well-known is that you really shouldn’t move your assets around prior to divorce in order to keep them out of the divorce. Doing this is known as a dissipation of assets in contemplation of marriage, and there is an economic fault element that the court can look back on when seeing what either party has been doing before the divorce. If the court finds out that you’ve been doing this, then you can get into a lot of trouble, resulting in high costs for tracking down those assets and information.

Ultimately, divorce is a very complicated ordeal. As we’ve discussed, it can stem from all sorts of issues, such as finances, politics, and religion. It’s never something we want to think about: it’s easy to pretend like there’s no problem rather than facing the unfortunate truth. However, once the decision of getting a divorce is made, there are some things that are necessary to know beforehand.

If you are in need of criminal defense or family law help (and yeah, we do some animal law things outside of criminal defense and family law, too) consider reaching out to Colorado Lawyer Team for a free 30-minute consultation. Find more information at https://CoLawTeam.com or call 970.670.0378.