Why Employers Can Fire You For Legal Marijuana Use

Can You Really Get Fired For Off-Duty, Legal Activities?

Earlier this month, we discussed Colorado Marijuana Laws. Most of these laws are well known, such as that you have to be 21 or older to legally possess marijuana, or that you can only have up to one ounce at time. However, there is one law that doesn’t seem to make much sense. You can possess, use, and even grow certain amounts of marijuana in your own home, completely legally. However, your employer is still able to fire you for it. And we’re not just talking about commercial drivers or forklift operators. We’re talking about grocery store clerks, fast food workers, office staff, and everything in between. So how is that possible? 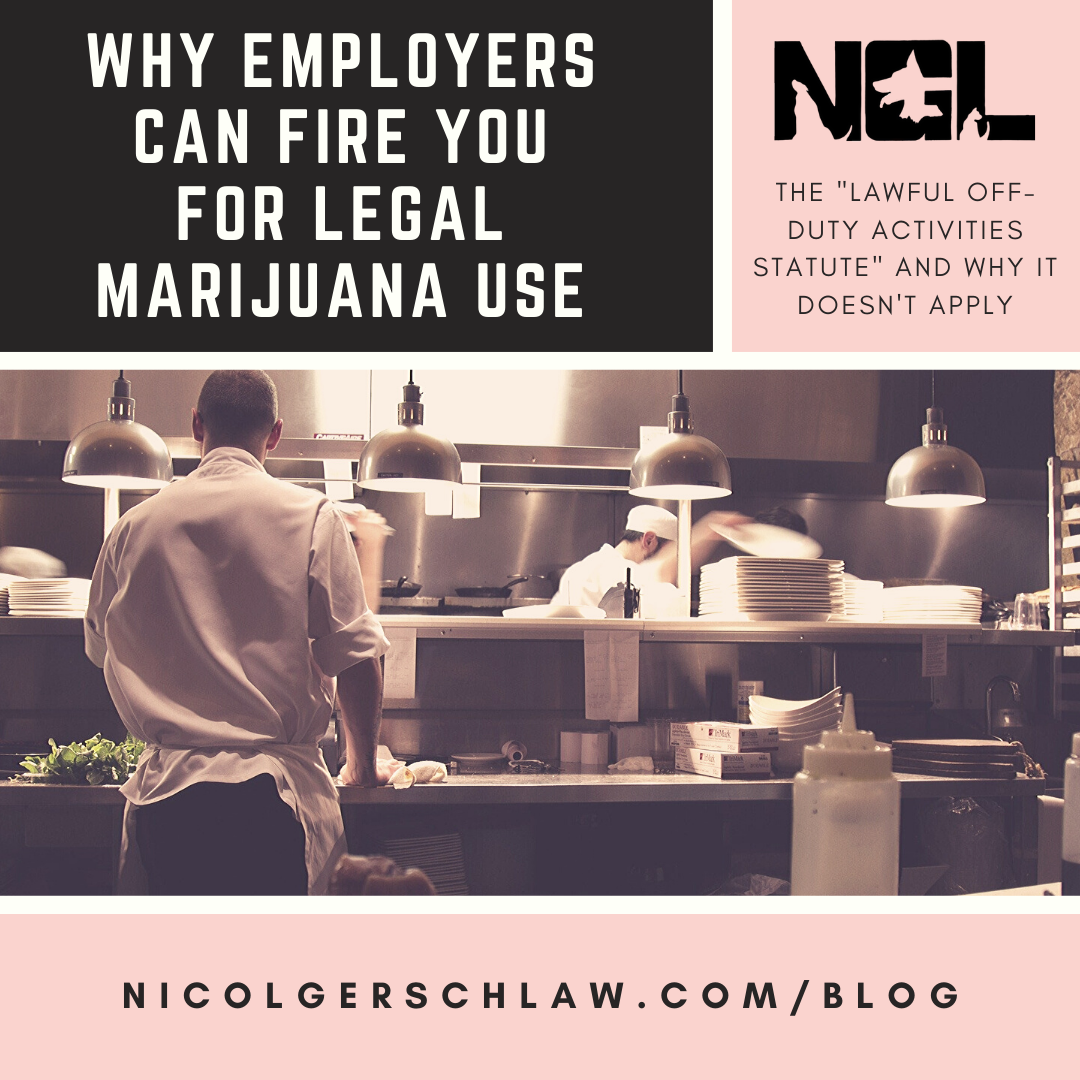 Colorado, among many other states, has a “Lawful Off-Duty Activities Statute” (CO Rev Stat § 24-34-402.5 (2016) This law states that employers cannot fire employees for engaging in legal activities on their own time. This alone would make you think that your employer could not fire you for marijuana usage. This is also what Brandon Coats, who took his case all the way to the Colorado Supreme Court, had thought.

Brandon Coats became quadriplegic in a car accident, and used medical marijuana to control leg spasms. He had his medical marijuana card and only consumed the drug off duty. His employer, Dish Network, fired him after failing a random drug test. Brandon Coats challenged this decision, and took his case all the way to the Colorado Supreme Court. However, the Colorado Supreme Court ruled in favor of Dish Network, 6-0.

The Lawful Off-Duty Activities Statute only protects lawful activities. And the Colorado Supreme Court Justices decided that “lawful activities” was defined by federal law, in which marijuana use is still illegal. In conclusion, Colorado law allows employers to set their own policies on drug use, including legal marijuana use.

The NOLO Legal Encylcopedia says it best, “As long as this disparity exists, Colorado employees will find themselves in the odd position of having a legal right to use marijuana, but no protection against being fired for exercising that right.”

So What Can You Do?

The only other thing you can do, unfortunately, is wait for new legislation. The rule that your employer can fire you for something legal doesn’t make sense to many people. It is likely this law will be challenged again, especially as our state and country seem to get increasingly lenient with marijuana laws. Nevada has already passed a law banning employers from refusing to hire based on a cannabis test. Colorado might soon have to revisit their previous decision on the matter – and if they do, we’ll keep you updated!

If you have additional questions or are in need of legal help, consider reaching out to Colorado Lawyer Team for a free 30-minute consultation. Find more information at https://NicolGerschLaw.Com or call 970.670.0378.