The events of 2020 have thrown a wrench in so many folks’ plans, lives, and businesses, our law firm notwithstanding. However, thanks to our adaptability and our existing virtual/remote operations, we are proud to say that we have been thriving through the storm. On July 1st, 2020, family lawyer Brandi Petterson joined our firm, and Nicol Gersch Law became Nicol Gersch Petterson. We opened a new location in Greenwood Village to expand our practice in the Denver Metro area and launched in Brush, Colorado to serve our Eastern Colorado clients, too… All of that pales in comparison to what we have coming in the next few months, though, as we’ll be launching a collaboration with Hello Divorce very soon!

Hello Divorce is a company that gives people the tools and instructions to file for divorce without a formal lawyer.  It’s an innovative way to find conflict-free resolutions to domestic relations matters using technology to help clients through their divorce, separation, and child custody matters themselves. Erin Levine, the founder at Hello Divorce, is an attorney in her own right, and a family law specialist in California. She also owns and runs Levine Family Law Group and has made waves for many years in the legal tech world with her innovative approach to divorce. 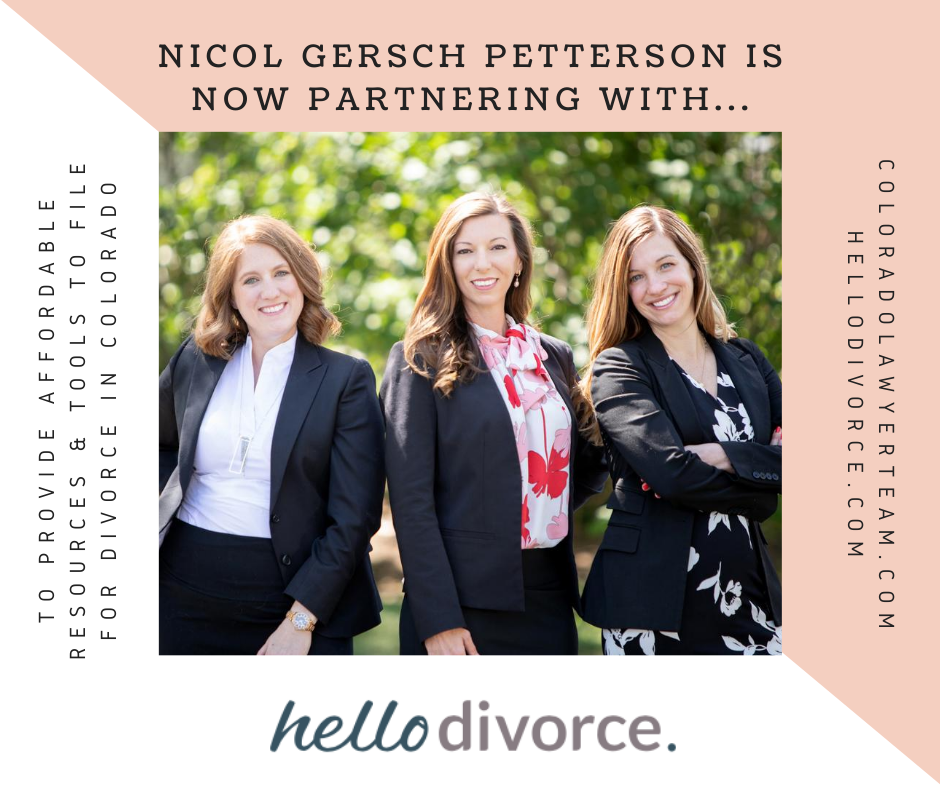 Hello Divorce has been written about a LOT in the legal industry, so we don’t need to belabor the point too much.  Suffice it to say, the platform makes divorce affordable and is a key player in the Access to Justice (#A2J) movement, something the entire team at Nicol Gersch Petterson emphasizes with our own innovative payment plans and unbundled representation. The ABA had this to say about the Hello Divorce platform’s background:

Hello Divorce was launched in 2017 as part of a law firm, and it offered instructional videos, DIY templates, legal coaching and paralegal help. In 2019, Hello Divorce became a nonlaw corporation that offers free tools and resources, a DIY divorce through templates and videos and access to legal coaches who can answer questions and review documents. If users want or need legal coaching, they can access, purchase and schedule time with a lawyer through the platform. That lawyer then works within the Hello Divorce platform so the user doesn’t have to start over with intake with a new lawyer or service.  All fees—whether subscription-based or fixed-rate—average a total of about $1,500 on Hello Divorce, and 90% of its paid users complete the divorce via the platform or services.

Erin, herself, has won numerous accolades, not the least of which are the James I. Keane Memorial Award for Excellence in eLawyering award from the ABA and Clio’s Riesman Award for Legal Innovation. Much like our all-women team here at NGP, Erin isn’t ever satisfied, though. And she began plans to launch Hello Divorce nationwide shortly after the success earned in California. By partnering with Colorado’s own A2J Tech, Erin is bringing Hello Divorce nationwide.  Here’s what Erin had to say to Bob Ambogi’s lawsitesblog.com when he interviewed her about the expansion:

Both Hello Divorce and A2J Tech are committed to making consumer-facing areas of law accessible to the ‘masses’ with a keen focus on the ‘middle class’ who often earn too much to qualify for legal aid organizations but don’t have enough funds to obtain quality and meaningful legal help.

Now, THAT’s a sentiment we can get behind!!!

Here’s the Kicker–HD is Starting in Colorado, and NGP is Ready to Help!

So, where does NGP come into play? Glad you asked… Again from lawsitesblog.com:

Hello Divorce charges users monthly fees based on their choice of one of four membership levels. These levels range from true DIY at $99 a month to “divorce with benefits” at $700 a month, which includes two hours of coaching with a lawyer. Users of the site can also opt to purchase upgrades on an a-la-carte basis that include various legal services, as well as divorce mediation and form filing with courts.

But, what’s a Californian like Erin to do when someone in Colorado needs that “upgrade?” Well, that’s where NGP comes in. NGP will provide the help on a step-by-step basis for folks who need just a little “nudge” in the right direction with their DIY forms from Hello Divorce.  This is big deal because it provides access to legal help that some may not have been able to afford before. These packages can walk you through the process without the need for a traditional lawyer/client relationship, which can save you thousands of dollars.

When Hello Divorce launches in Colorado later this month, Colorado residents will also be able to buy these packages and get the tools they need to file for divorce themselves. Legal advice along the way will be given by family lawyer Brandi Petterson, with help of our NGP staff. If you have questions in the meantime, we will also be posting articles both here and on Hello Divorce’s site with legal information to help answer your questions. These include:

And plenty more to come (cough: the DIY equivalent in criminal defense, too! cough).

We are proud to contribute to the noble effort of making legal help affordable and accessible to all. Stay tuned for updates!