What The Enhance Law Enforcement Integrity Act Means For Colorado

The murder of George Floyd by Minneapolis Police Officer Derek Chauvin lead to protests all around the country, and even other parts of the world. Protests are still raging today, months later, for the Black Lives Matter movement, increasing police accountability, and defunding police departments. In the wake of protests in Denver, the state passed the Enhance Law Enforcement Integrity Act (SB20-217). This act is meant to increase police accountability and integrity through increased restrictions, increased reporting, and decreased protections for police officers. This act is not the end-all solution to police brutality, and still contains loopholes and exceptions that will need to be addressed. However, it was a major step for reforming police departments. Most importantly, it also set a higher bar for law enforcement agencies around the country. 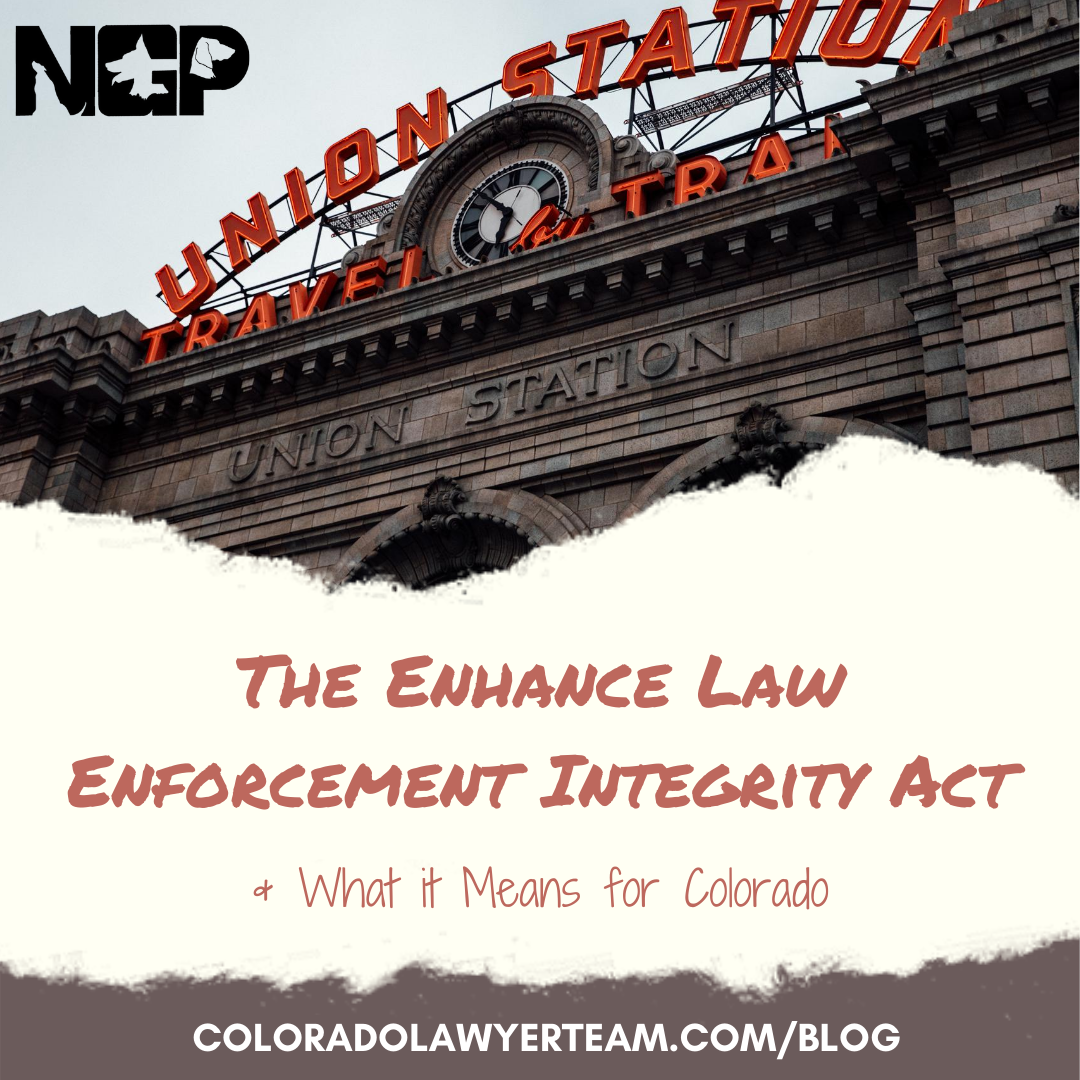 Beginning July 1st, 2023, local law enforcement and Colorado state patrol are to issue body-worn cameras for their officers. Some officers are exempt from this requirement, including:

An officer needs to wear and activate the camera when responding to a call for service, or during interaction with public when initiated by the officer. This includes when an officer is enforcing the law or investigating possible violations. This act does allow officers to turn off their camera in certain situations. These include:

Additionally, all recordings of an incident must be released to public within 21 days after complaint of misconduct. However, the act still allows for redaction or non-release of the recording if there is a specified privacy issue at stake. Police who purposely fail to activate their cameras or tamper with them could face criminal liability or other penalties.

The Enhance Law Enforcement Integrity Act also requires the Department of Public Safety, Division of Criminal Justice, to create an annual report of the information that is reported to them. This report includes,

If state or local law enforcement fails to meet reporting requirements , it is subject to suspension of its funding.

As of January 1st, 2022, the act also requires the Peace Officer Standards and Training Board to create and maintain a database regarding individual officers. The database will contain information on an officer’s untruthfulness, repeated failure to follow training requirements, decertification, and termination for cause.

At protests, law enforcement agencies are prohibited from:

Restrictions for Use of Force

The Enhance Law Enforcement Integrity Act limits the use physical force and deadly force. This includes prohibiting chokeholds. Additionally, deadly force can not be used against someone for a minor of nonviolent offense. An officer can only use lethal force against someone fleeing from police if they pose an immediate risk to the officer or public. Fortunately, it also requires an officer to intervene if another officer is using unlawful physical force. The intervening officer must file a report regarding the incident. The act does state that officers will be protected from retaliation if they intervene, but this could be hard to enforce in practice.

The act makes it so if an officer is convicted, or pleads guilty / no contest to a crime involving unlawful use of threatened use of physical force, or is found civilly liable in the case, the Peace Officer Standards and Training Board shall permanently revoke the officer’s certification. Similarly, if an officer fails to intervene in another officer’s use of unlawful force, or is found civilly liable in this case, their certification shall also be revoked. In both of these cases, certification will not be reinstated unless exonerated by the court.

This act also removes the qualified immunity defense for officers. Qualified immunity previously make it impossible to sue the officer personally, and only made it possible to sue the department or agency. This act now makes it that people who allege civil rights violations will be able to sue individual officers. If the officer was determined not to have acted in good faith, they can be held personally liable for the lesser amount of either 5% of a judgement settlement, or $25,000.

The Enhance Law Enforcement Integrity Act creates a lot of requirements and restrictions that should have already been in place. While the passing of this law was a ground-breaking, positive step, to understand the full effect of this act we will have to see how it is enacted and enforced in 2022, 2023, and beyond.

For more information about protests and law enforcement, see our posts:

What To Know Before Protesting

If you have questions about this act or your civil rights, consider reaching out to Nicol Gersch Petterson for a free 30-minute consultation. Find more information at https://CoLawTeam.com or call 970.670.0378.