On June 29th, 2021, Susan Smith Blakely published an article in the ABA Journal questioning whether lawyer moms are paying enough attention to upward mobility. In her eyes, they’re not, because being a mother and having a successful career can’t coincide. This post will effectively look at why Blakely is incorrect, and what assumptions she makes in order to reach her conclusion. Last week, we also addressed How Returning to Work Is Affecting Moms, as well, so be sure to check out part 1 of this 2 part series on momming while working. 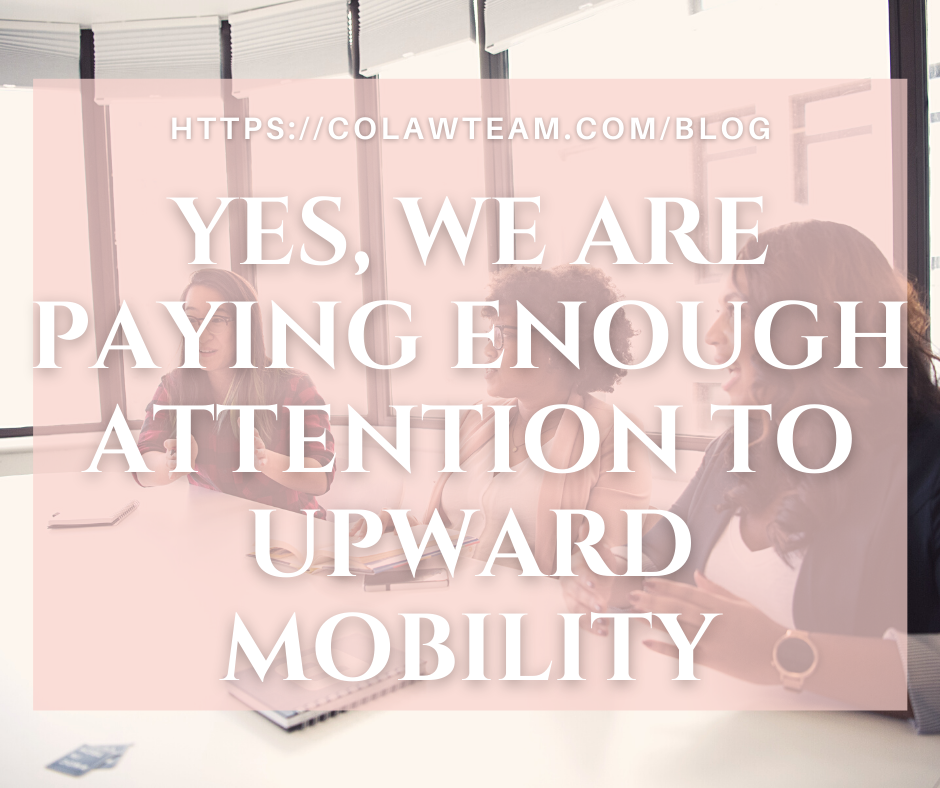 “The Responsibilities of Motherhood”

One of the first points Blakely makes in her article about lawyer moms is that “there is nothing that can derail a career faster than the responsibilities of motherhood.” She backs up this statement by explaining that female lawyers are already consumed by their busy schedules, and having children can sidetrack their plans of evolving their job into a long-term career. This is Blakely’s first mistake: she makes a hasty generalization that all lawyer moms think and act the same. This informal fallacy uses a small or nonrandom sample to make conclusions about a population. In Blakely’s case, she generalizes an entire subpopulation of the legal field and comes to conclusions that may fit the few, but not the whole.

On top of this generalization, Blakely is insulting an entire group of women by saying they cannot balance their home and work life. Although she claims to be dedicated to the idea of women helping out women, her article tears down women more than it lifts them up. This may have been an error in wording on her part, but it does not excuse the meaning behind the words.

Our founding partners here at the Colorado Lawyer Team, Jennifer Gersch and Justie Nicol, are both mothers and lawyers themselves. Contrary to Blakely’s ideas, both Jennifer and Justie have successfully managed their work and home lives while expanding their firm, mentoring aspiring young lawyers, and building an effective team. Sure, having a career while having children can be stressful, but this can be said about any job and for any parent. It also doesn’t mean that excelling in their field is impossible for mothers: jobs are difficult all the same.

When I asked Justie whether being a mother had an negative impact on her work, she actually said it made her a better lawyer. Having a family while working taught her to stop procrastinating and to be as efficient as possible in the office and at home. She also said that there’s no such thing as balance when it comes to having a career and a family, noting, “Sometimes one thing takes priority over another. The next week– or even the next day–it may be different. All you can hope to do is accomplish the most impactful work (at home and at work) in the amount of time you are allotted. Live in the moment!” This directly challenges the idea Blakely argues that “…living only in the moment is a bad idea when it comes to professional growth and career advancement.”

This is Blakely’s second sentiment: she explains that working mothers are stretched too thin between the demands of raising children and maximizing time in the office, noting that these women “are exhausted.” She also states that many stop trying to promote their firms and quit socializing and self-promoting altogether. To this, I have one simple question: what are your sources? Where are you getting this information from? Out of all these statements, Blakely does not back up what she says with statistical evidence, testimonials, or even a second opinion from another lawyer. Yes, this is an opinion article, but it does not mean that opinions don’t need to be backed up with evidence.

In this section on motherhood, Blakley also says that lawyer moms are their own worst enemies, saying, “They end up sacrificing good performance on the altar of perfection.” A case could be made that her statements are ad hominem, or fallacies of personal attack. However, the greater argument to raise is that Blakely considers this fault to be born from the women themselves, not the career field they’re a part of. Everything she says can be tied back to this very question: who do you blame, the women or the nature of their careers? Well, she never does answer this question.

In the third section of her article, Blakely discusses leadership potential, the “growth mindset,” and being a team player. She notes that team success and effective mentoring are crucial in the promotional process. She also says that when young lawyers are frustrated with the lack of leadership and feedback from their managers, they are mostly talking about lawyer moms. If we examine this idea, two points arise. One, Blakely does not directly say that lawyer moms are the problem, but rather she hints at the idea. Second, she seems to believe that there is a causal relationship between lawyer moms and lack of attentiveness, rather than a correlational one. In other words, Blakely is saying the reason lawyer moms are poor managers is because they are mothers, and not for any other reason. Any person well-versed in logic and research would know that you cannot make causal statements like these because they simply aren’t true, or at least they are not proven. It’s also important to note that Blakely does not cite any source for this statement either.

She goes on to discuss the “growth mindset” versus a “fixed mindset,” but she merely hints that female lawyers need to be more attentive to the “growth mindset” if they want to excel in their careers. What she does make clear is this: “Effective mentoring and leadership are essential to successful business models, and as challenging as it can be for lawyer moms, they must be willing to be team players and invest time in the careers of others.” The first issue with this statement is that Blakley makes another hasty generalization. This comes across as “all lawyer moms have this issue,” not “there may be some lawyer moms who struggle with this.” She also says this like it’s something women lawyers don’t already know and don’t already do, making it a very condescending sentiment.

I asked Justie whether she found it difficult to be a team player and invest time in the careers of others because of having a family at home. To this, her first words were, “Considering our firm name is literally COLORADO LAWYER TEAM, no.” She wholeheartedly opposes this idea, saying that although some months are worse in terms of revenue or goals compared to her partner, she still strives to make up for it in other aspects of her work. The most important thing she’s found in terms of teamwork is trust, knowing that everything will come together in the end. This is especially true with the team we have built here at the Colorado Lawyer Team. No matter what, we all strive for a common goal, and whether we fail or succeed, we do it together.

The Response: Lawyer Moms are Awesome

As one can imagine, Blakely’s article did not go over well with the majority of female lawyers who read it. Our response to her work is one of many circulating the internet, with others including article replies, tweets, and even video responses from female lawyers and others expressing their disdain for her piece. While it’s true that Blakely has worked to support women in the legal field, it’s safe to say that this piece took a step back rather than a step forward. Kat Griffin, the founder and editor-in-chief at Corporette, voices her frustration in her article response to Blakely. She says that pieces like this are what push lawyers moms out of law firms or make them question whether to have kids at all.

Twitter user @KSVesq, who is a mother of two, expressed her anger at Blakely’s own response to the article (which she has taken down). In her tweet, she says, “1. I’m not anonymous. 2. None of us took what you said out of context. We quite literally quoted your article, almost in entirety. 3. Instead of hearing a counter position, you default to ‘mean girl’ tone policing, another tactic used to silence women.” The replies to this tweet were in full support of @KSVesq, and women lawyers were responding to Blakely with their full names and badge numbers when Blakely claimed that they were being anonymous.

Even ABA President Patricia Lee Refo published an article in response to Blakely’s piece. In her article titled, “Women’s success in legal careers: Lack of advancement is not a ‘woman’ problem, it’s a ‘profession’ problem,” Refo says this:

“The lack of upward mobility by women in the profession is not because women are not putting in the time and effort, nor is it because they are distracted by other concerns in their lives. Legal employers have plenty of systemic issues that need to be faced head-on when it comes to the promotion and retention of women attorneys. Blaming women attorneys is appalling.”

She also notes that Blakely’s opinions were “antithetical to the core beliefs and principles of the American Bar Association.”

As far as our firm’s response to Blakely’s piece, it’s rather evident by now that we do not support her views about lawyer moms and upward mobility. Refo drives home the point that was discussed earlier: Blakely doesn’t seem to consider that there are structural issues within the legal field that prevent women from excelling in their careers. Blaming female lawyers and saying they are incapable of balancing their work and home lives while making others suffer at work is the antithesis of supporting them, something Blakely claims to do.

Overall, seeing articles like this published by such well-known organizations, especially in today’s time, is disheartening for female lawyers. It’s taken far too long for women to enter the field, to no fault of their own, and sentiments like these work against all the progress we women have made in the workforce. So yes, Ms. Blakely, we are paying enough attention to upward mobility, but that isn’t the problem.