What To Know Before Protesting

The Constitutional Right To Protest & Limits to That Right

So far in 2020, we have seen quite a lot of political conflict. In fact, we have been seeing non-stop protests for months in certain cities. Many protests are in support of Black Lives Matter, defunding the police, and getting justice for people of color controversially killed by police. And these have also stemmed counter-protests, in support of police or “Blue Lives Matter.” On top of all that, there are protests for re-opening establishments that have been closed due to COVID, or protests against face masks requirements. You get the picture – there’s been a lot of protesting lately! And no matter what you are protesting for or against, you should know that their are limits to your right to assembly. If you decide to attend a protest, you should be aware of your rights, limits to your rights, and how to safely interact with police. 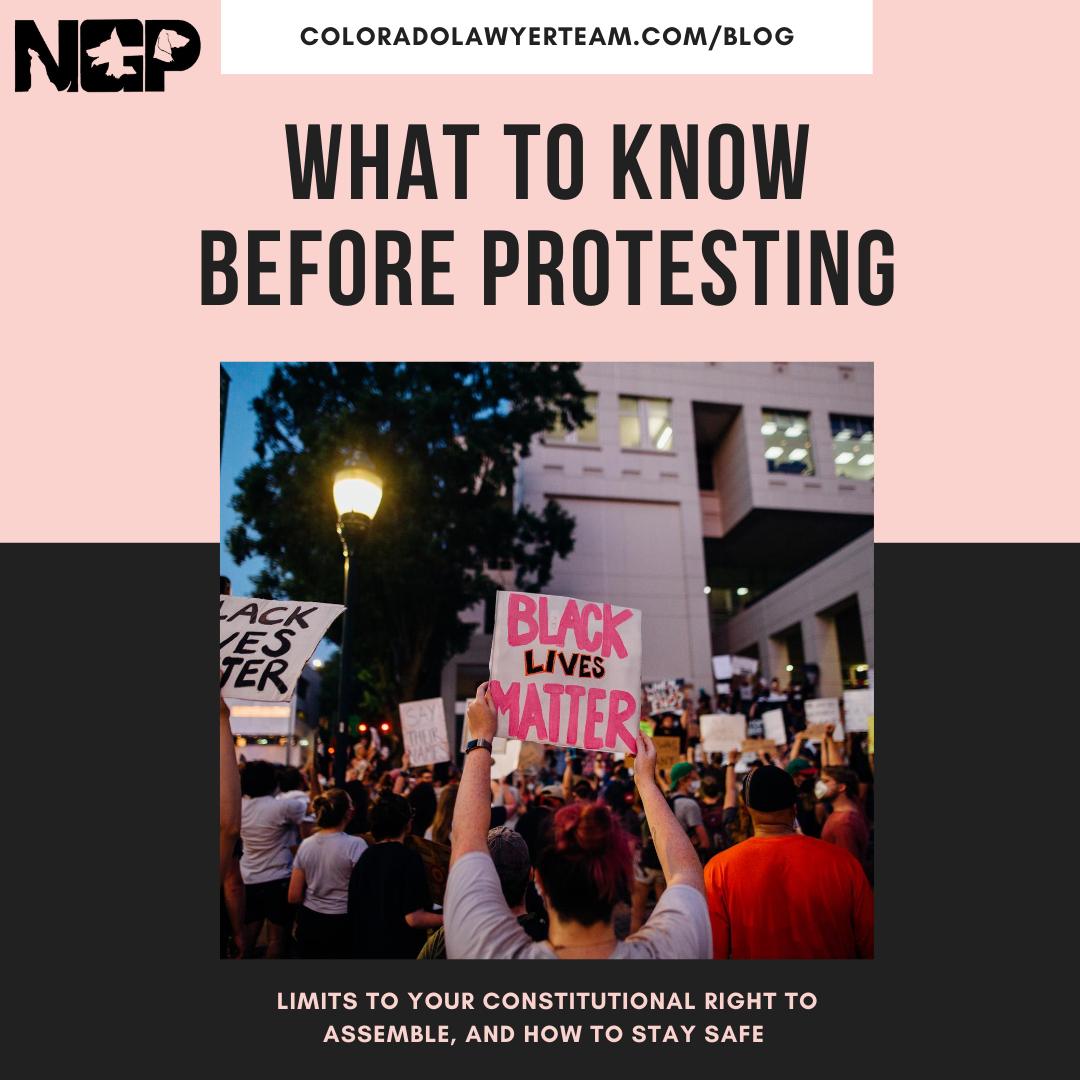 Can The Government Stop You From Protesting?

The 1st Amendment guarantees your right to peacefully assemble. However, the government can impose reasonable restrictions on the time, place, and manner of speech. They may not restrict the content of speech. And when restrictions are put in place, they are required to be reasonable, content neutral, and narrowly tailored. This means the restrictions are supposed to be designed to serve legitimate concerns with as few restrictions as possible on constitutional rights. So for example, police may be able to enforce a curfew on certain assembly, if they justified this by protecting public safety. However, they could not tell you that you cannot protest at all. Additionally, police must make restrictions that are content-neutral. They cannot establish a curfew for Black Lives Matter protests, while allowing an Anti-Mask protest to assemble simultaneously. Of course, there are issues here with what restrictions are “reasonable.”

Additionally, sometimes you will need to obtain a permit to assemble. If you are planning an event that will block vehicle or pedestrian traffic, check with local ordinances to see if a permit is required. The government is not allowed to require a permit for protesting when the protest does not hinder traffic, create a risk to public safety, or compete with other’s uses beyond the ordinary use of the space.

Your Rights on Public vs. Private Property

On public property, your rights are strongest in “traditional public forums” such as streets, sidewalks, and parks. However, not all property owned by the government is considered public. Generally, protesting inside of government buildings (or even the steps of government buildings) may be prohibited. Sidewalks and parks are your safest bets. Streets may require a permit.

On private property, property owners may set their own rules for speech. The government can not restrict your speech if it is taking place on your own property, or with the consent of the property owner. However, there is risk here if the assembly spills in to a neighboring property that does not consent. And also, noise ordinances will still be in effect!

What Is The Penalty For Protesting In Prohibited Areas?

If you are protesting past a curfew, on a street without a permit, on private property without consent, the police will often intervene. Hopefully, their first step will be to ask you to leave. However, if you don’t, you can face penalties. The most likely is Municipal Violations, which are often fines and may or may not show up on your criminal history. However, harassment, trespassing, and disorderly conduct charges are also possible which could have more serious ramifications.

If you are protesting after curfew, those curfews are often set at a municipal level. Some cities have announced that they are not prosecuting curfew violations, although protesters are still getting arrested, only to be released the next day with their case dropped. In these instances, the arrests are used as a method to clear the streets.

Protesting during the coronavirus epidemic has brought upon a whole new set of issues. The first is that your right to assembly may directly conflict curfew orders or stay at home orders. Many are predicting that your right to assemble will trump the stay at home orders. However, that’s not a guarantee and it is something to be aware of. Another issue we have seen recently is the act of spitting on someone else. It is always an offense to spit on someone else. If you spit on a cop or EMT, that is a felony crime, especially if you have intent to infect them.

Historically, many protests and activists are younger. We have seen many 15-17 year olds protesting, and have also seen many parents bringing their younger children. One thing to be aware of is that in Colorado, juvenile prosecution is allowable for children 10 years or older. This means teenagers protesting should be aware they can be arrested.

If you are bringing small children, you should be aware of the risk of potential harm. Although we have not seen this happen yet, if your younger child is harmed at a protest, the parent could potentially be charged with child abuse for endangering them. If you are thinking of bringing children to a protest, be aware of the risks involved and what times/places pose the greatest risk. For example, an organized march in the middle of the day has a significantly different risk level than a protest at night.

Can You Verbally Criticize Police?

You absolutely can, but it may be in your best interest to not. Your 1st Amendment right does protect you under this circumstance. Police cannot arrest you for saying offensive things to them. However, you should still be aware that while it is legal, it might not be smart. Aggravating a police officer could risk your safety or increase your chances of being arrested, whether it’s a lawful arrest or not.

How To Interact With Police at Protest

For more information, see our blog post Dealing With Police. Speaking with police more than those three sentences can incriminate yourself or those around you.

What To Do If You (Or Someone Nearby) Is Arrested

If you witness someone being arrested, you may wish to film the incident for accountability purposes. If you choose to do so, it might be in your best interest to announce that “This is a phone, and I am filming.” This is to prevent the police from mistaking your phone as a weapon. And of course, stay a reasonable distance away from the incident or else they can intervene. It’s also important to know that police can never search your cell phone without consent or a warrant. For more information, see our blog post Know Your Rights: Recording Police Officers.

If you are being arrested, even if you believe wrongfully-so, it is best to remain calm and let it happen. If you are charged with resisting arrest, that is a completely separate crime from why they are arresting you in the first place, and can be difficult to fight. There has been situations where the underlying reason a citizen was arrested has been dismissed in court, but their “Resisting Arrest” charge has remained, because it is separate crime from the initial incident. Resisting arrest also puts you at risk of experiencing physical harm.

Conflicting protests that occur in the same location can often get especially heated. It is the police’s obligation to keep the peace in this situation. They can keep groups separate, but they cannot order only one group to disperse. However, in Black Lives Matter protests, it is often the case that the police are not a neutral party, and may have their own interests involved.

When Police Can Disperse A Protest

Police can disperse a protest when there is a riot, a clear and present danger to public safety, or interference with traffic. Police can order a protest to be dispersed, but they must give a reasonable opportunity to comply, a notice of order, and a clear exit route to follow. In general, these requirements are not being followed right now.

If a few individuals are rioting or causing property damage, the police are generally not allowed to arrest everyone at the scene simply for being nearby. However, this isn’t always followed. Some attorneys are concerned that police can arrest bystanders who did not attempt to stop the violence for conspiracy. Footage from the media and protesters cell phones shows that police may not be currently following this rule. However, it is hard to know for sure until these charges actually make it to court – most of which are being processed in October or even November.

The right to assemble has many limits that protesters should be aware of. And some rights protesters do have are currently not being followed. It is unfortunate and unconstitutional that peaceful protesters are facing so many difficulties to invoke their first amendment right to assemble. If you decide to protest, you should be aware of the risk you are taking and take as many steps to ensure your safety. This includes complying with municipal rules, not speaking with police under most circumstances, not resisting arrest, etc. Being aware of your rights and limitations can help ensure your safety while protesting and interacting with police.

If you have questions or have been arrested while protesting, consider reaching out to Colorado Lawyer Team for a free 30-minute consultation. Find more information at https://CoLawTeam.com or call 970.670.0378.