Sexual Offenses in the Era of #MeToo

False Allegations During the #MeToo Movement

Over the course of 2017 and 2018, many began seeing the phrase #MeToo all over social media and news websites. The #MeToo Movement is a movement against sexual harassment and sexual assault, particularly committed by powerful or prominent men. The movement is largely positive, and helped expose many repeat sexual offenders. The movement began shifting our culture, to the point where most women are now automatically believed when accusing someone of sexual offenses. This is especially important in a country where 81% of women have experienced sexual harassment, and almost 20% have experienced sexual assault. However, this comes with a major downside. The #MeToo movement has created a culture where those accused of sexual assault are socially considered guilty until proven innocent. 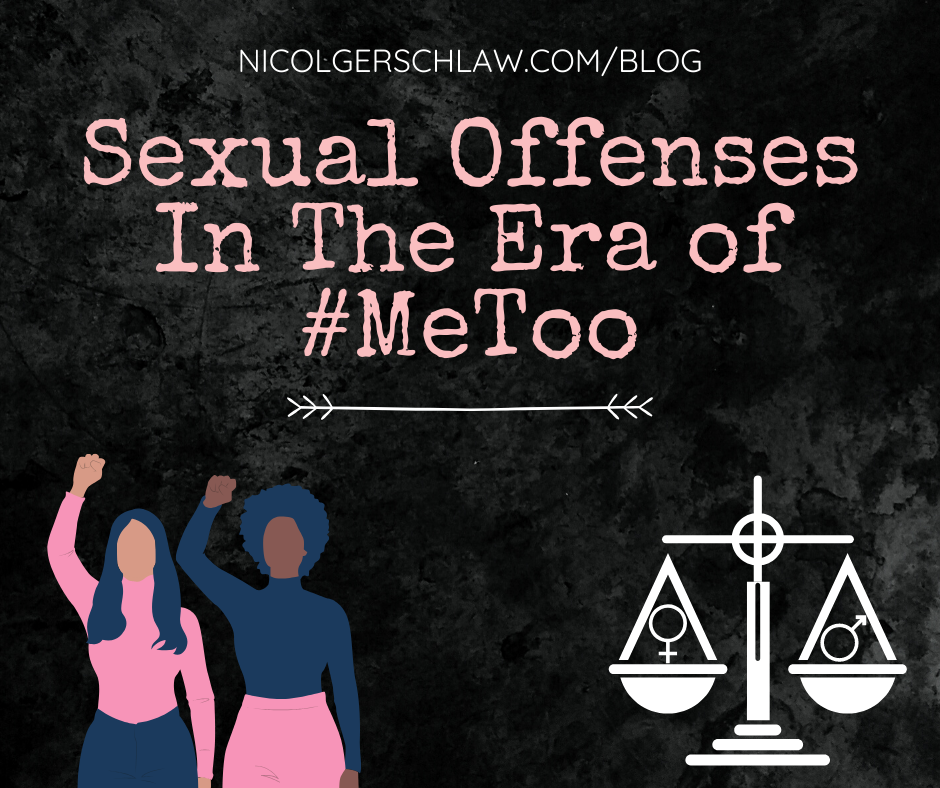 For the most part, this is for good reason – only 2% of sexual assault allegations have been found false. Unfortunately, this leaves 2% of innocent men being socially ostracized, and often fired from their jobs, before they have had a chance to explain themselves or dispute the allegations in court. This is also a huge problem when juries get involved, as the average person may be more likely to believe a sexual assault allegation with less evidence than before. While 2% of allegations doesn’t seem significant, that small statistics is innocent men who are being denied their right to be considered innocent until proven guilty. Unfortunately, this overall positive movement has one small, but life-ruining consequence… and not very many solutions.

The #MeToo Movement has largely had positive effects. As a team of all women colleagues, we are certainly not denying that! It has changed the way coworkers interact with each other, the way supervisors treat their employees, encouraged sexual harassment training, and changed the way organizations and people handle allegations of misconduct. It has also lead to the conviction of many repeat sexual abusers, who otherwise might have been left to keep abusing other women. The movement also left many women empowered to share their stories, and helped many with emotional healing.

However, there has been some negative effects felt too. In fact, 57% of U.S. adults were equally concerned for the harassment young women could face, and the false allegations men could face. And 60% of men are afraid to mentor women at work, especially without a third party present. Most of these fears are unfounded, considering only 2% of allegations are false. However, for these unlucky 2% of cases, there is often no relief. Once an allegation is made, the accused will often face immediate hits to their career and reputation, before they have a chance to prove themselves in court.

And some men say there is no way to win. If you do not deny the allegation you are immediately presumed guilty, and if you do deny the allegation you are still accused of being guilty, and calling an abused women a liar. The falsely accused are also at a disadvantage if the allegation goes to court. The public perception that an alleged abuser is guilty until proven innocent can make it extremely difficult to find a non-biased jury. In the best case scenario, the accused would be found innocent by the court. However, even in that case, their career and reputation may never recover.

Who Does This Really Affect?

While false allegations are a rare occurrence, it appears to have a larger effect on non-rich, non-powerful men. These men do not have the ability to hire an elite legal team to fight the allegations, and can end up facing consequences for actions they did not commit. This is in contrast to prominent men, who often face no consequences whether they committed the crime or not.

One example of this is Brett Kavanaugh, U.S. Supreme Court Justice. After being nominated to the court, Kavanaugh’s high school classmate, Christine Blasey Ford, publicly accused Kavanaugh of sexual assault. Two other accusers also came forward from his college. The parties were invited to the Senate where they were both allowed to testify. Despite multiple accusers and evidence presented by the victims, the evidence presented did not even lead to an official investigation. This man was not only not investigated, but was still allowed to join the highest court in the United States for the rest of his life. He faced absolutely zero consequences for these accusations.

Average men do not receive this treatment. Instead, they will immediately suffer career and reputation hits that can follow them for the rest of their lives. They will often spend an extravagent amount of money in legal costs. And sometimes despite their efforts, they will face legal consequences for crimes they did not commit.

The honest answer is, we don’t know! The #MeToo Movement started a huge cultural change where sexual harassment and assault are finally taken seriously. When women accuse someone of sexual assault, especially prominent men, statistics (and empathy) say we should believe them. However, it’s really hard to know which 2% of men are actually innocent. And the legal principles of this country do specify that the accused are to be treated innocent until proven guilty (but as we know, that isn’t always the case with ANY crime due to our bail system.) Overall, it’s a complex problem with no easy solution.

As a criminal defense team, we know that false accusations DO HAPPEN. We’ve seen them, and we’ve fought them in court. If you are in need of legal help, consider reaching out to Colorado Lawyer Team for a free 30-minute consultation. Find more information at https://NicolGerschLaw.Com or call 970.670.0378.