So You Weren’t Mirandized, Now What?

When is a Miranda Warning Actually Required?

Most of us have some idea of what a Miranda Warning is, but few actually know when it’s required. If you’re a fan of cop shows, you may even be able to recite it from memory! Basically, a Miranda Warning notifies criminal suspects in police custody of their rights. It goes like this:

However, they don’t have to read you those rights if you’re not in custody or haven’t been arrested. Even then, police interrogation (any words or questions the officer reasonably knows will illicit an incriminating response) is required. That doesn’t mean they can’t ask you mundane questions, but they cannot interrogate you in custody without the warnings. And even if law enforcement did forget to read you those rights in custody, it most likely won’t end in your case being dismissed. 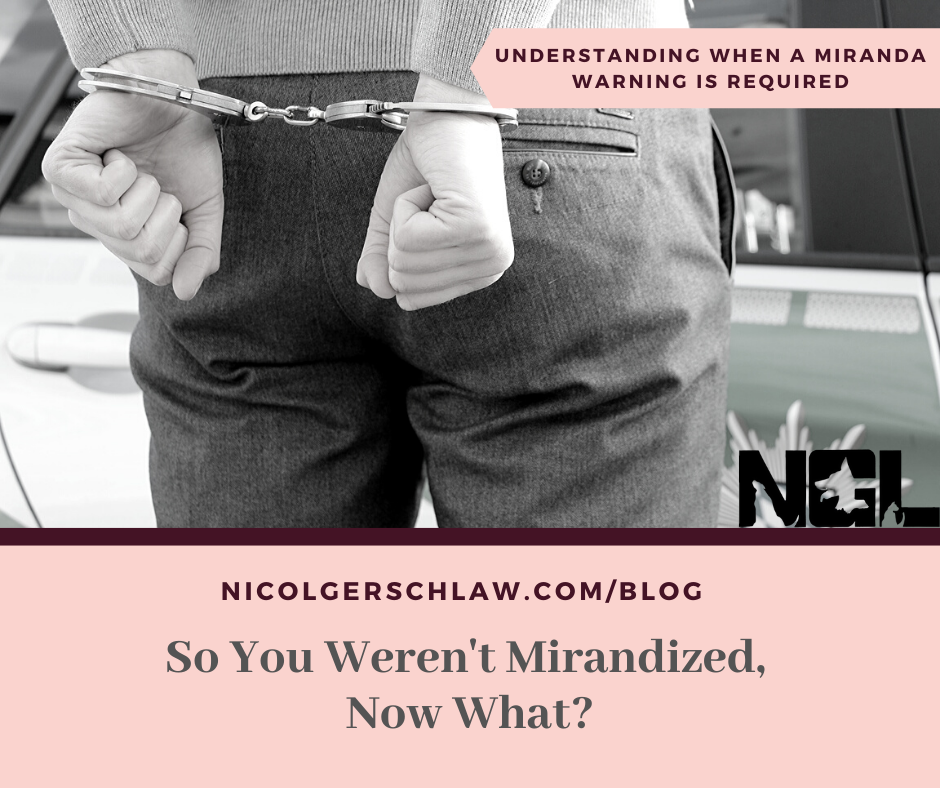 So When Is A Miranda Warning Required?

Police must read your Miranda rights if you are in custody, are asking you questions, and are using your answers as evidence in trial. Being in custody means that you are deprived of your freedom of action in a significant way, and can occur in jail or outside of jail. Generally, if you are arrested they have to read you your rights. However, if you are not in custody, officers do not have to read you your rights and your statements can still be used as evidence. In fact, police officers can avoid arresting you until you’ve said something incriminating for that exact reason.

If you haven’t been arrested but police are questioning you, it is still advisable to remain silent except when asked for identification. If you have been arrested and are being questioned, the near-universal advice among defense attorneys is to not respond to any questions until after consulting an attorney. Take advantage of your rights and avoid incriminating yourself! For more information about your rights during police encounters, you can see our blog post Dealing With Police.

If you did answer questions while not in custody, those statements are generally admissible in court. This is because the encounter was considered consensual, and the statements given were considered voluntary. To determine if a statement was actually voluntary, your attorney might consider:

All of these factors might indicate whether or not your Miranda rights should have been read. The most important thing to remember is that you always have the right to remain silent, even if that right was not read to you.

So What Happens if You Weren’t Mirandized?

If law enforcement did not read your Miranda rights while you were interrogated in custody, your statements generally cannot be used as evidence in trial. Contrary to many TV shows, your charges are not immediately dropped! The failure to read your rights might still benefit you by allowing for the suppression of certain evidence. However, there is usually enough other evidence to continue with the case.

As always, there are exceptions to using your statements if you weren’t Mirandized. There are some statements that can be used in court regardless if your Miranda rights were read or not. These include:

Your rights can be confusing, especially with so many loopholes and exceptions. If you have questions about your rights or need other legal help, consider reaching out to Colorado Lawyer Team for a free 30-minute consultation. Find more information at https://NicolGerschLaw.Com or call 970.670.0378.