What You Need To Know About DUID

Driving Under the Influence of Drugs (DUID): A Primer on What Not to Do

A DUID refers to the crime of driving under the influence of drugs. This could mean many types of drugs ranging from marijuana, to opiates, to “hard drugs” such as cocaine or meth. More people have committed this offense than you may think – a survey by the National Highway Traffic Safety Administration shows that a staggering 20% of weekend, nighttime drivers tested positive for illegal prescription or over-the-counter medications. Additionally, the survey indicated that between 2007 and 2015, the number of drivers killed in crashes who tested positive for marijuana doubled. It seems that DUID offenses are rising as certain drugs are legalized or decriminalized – so what should you know? 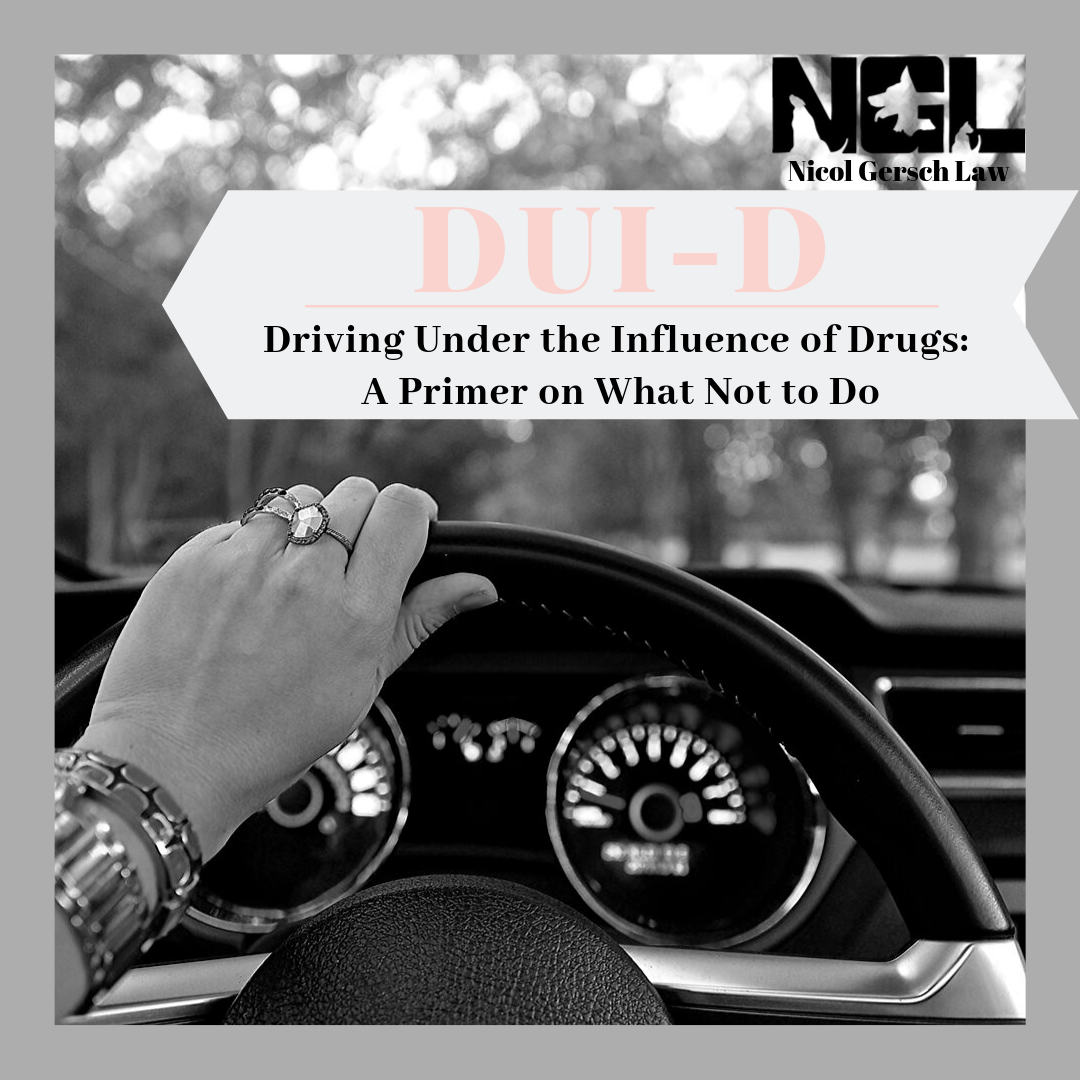 What’s considered too high to drive?

The bottom line is that drugs affect everyone differently. One amount of the same drug might have very different effects from one person to the next, especially depending on tolerance and body size. With alcohol, you can follow standard rules of thumb such as that two drinks (12 oz, beer, 1.5 oz shot, or 6 oz wine) will raise your blood alcohol level to approach the legal limit of 0.05 and it takes just as long to get sober as it does to get drunk.  There is no such rule of thumb or any guidelines whatsoever for DUID’s, though.

There are no standard guidelines for marijuana since it can vary depending on strain and method of consumption. In Colorado, if THC in the bloodstream is 5ng/ml or higher, it is assumed that the driver was impaired. That’s actually a pretty high level, and it’s measured using active THC in your blood–not the inactive components that can remain for months at a time.  Since there are no general guidelines to follow with MJ, most users rely on what their body tells them is safe to drive. However, you are not likely to accurately guess how intoxicated you are – and the more intoxicated you get, the worse your estimate will probably be.

Overall, there is no fool-proof way to know if you are too high to drive and risking a DUID. Worse still, if you are drinking and smoking, or even drinking while taking your regular prescribed medications, then you are likely even more impaired than you realize.

What should I do if I’m pulled over for DUID?

If you are pulled over for DUID, there are many things you should consider. How much you’ve had to drink, how long ago, what other medications or drugs might be on board, and how bad the driving behavior was.  If you’re not sure why the officer pulled you over, it’s sometimes best just to ask. In most circumstances, it is not beneficial to take the roadside safety maneuvers as the testing is very subjective, and unless you’re young, fit, with good balance, you’ll have a hard time passing.

If you are given the choice to take a portable roadside breathalyzer test and you have consumed zero alcohol, then it is in your best interest to take the test. This will at the very least prove you are not under the influence of alcohol. However, it may also narrow the officer’s suspicions down to assuming that you are under the influence of drugs and they’ll kick the DUID investigation into high gear. They may no longer give you the option of taking a breath test back at the station, and may require a blood test instead. The roadside test is not admissible in court, but the one at the station would be. So, an alternative would be to refuse the PBT on the side of the road, and just ask for the breath test at the station (of course, at that point, you’re probably under arrest anyway).

If at this point an officer instructs you to take a blood test, you should make note of the timing. If they test you outside of two hours, it may be possible to save your license during administrative proceedings with the DMV, or even get you out of the criminal case entirely.  In almost every case, it doesn’t pay to be a jerk. If you’re borderline, the officer may just park your car and find someone to pick you up.  It does happen, albeit rarely in the Colorado Front Range area.

How will police know if I’m high?

If police suspect you are under the influence of drugs other than, or in addition to, alcohol they might have you evaluated by a Drug Recognition Expert (DRE). A DRE is a law enforcement officer trained to identify drivers under the influence of drugs. To evaluate the driver, DREs use a 12-step process. This includes a breath alcohol test, interview of arresting offer and driver, and an evaluation of the driver’s body and behavior. This can include eye examinations, vital signs test, examination of muscle tone, a check for injection sites, and more. The last step is to request a blood, urine, and/or saliva sample for lab analysis. Lab results can take months after your arrest in most DUID cases, so a “negative” result won’t save you from being arrested–but will result in the DUID case being dismissed later in court.

Research by the National Highway Traffic Safety Administration, which pushes the DRE program, suggests Drug Recognition Experts are accurate about 85% of the time. However, independent studies suggest their accuracy may only be about 50%. Overall, the process is subjective and there is plenty of room for error.

Don’t wait, call for help with your DUID today!

If you have been arrested for driving under the influence, consider reaching out to Nicol-Gersch Law for a free 30 minute consultation. Find more information at  https://colawteam.com. Or just book a call with us now!  https://Colorado Lawyer TeamScheduling.as.me/

If you have done both of the things mentioned earlier–signed a letter and paid us–then, and only then, you might be a client. But merely chatting with us online does not a client make. Suffice it to say, if you aren’t absolutely certain about whether or not an attorney-client relationship exists between yourself and NLO, you should probably ask for some clarity. Until then, we’ll keep your secrets but we don’t formally represent you… YET.