Understand Voter Intimidation in Colorado – Protect Yourself and Your Vote

Now that early in-person voting has begun in Colorado, it’s important to understand Colorado’s laws relating to voter intimidation. Recognizing what’s considered voter intimidation may not only help keep you out of trouble but can help you report such illegal conduct if you encounter it. 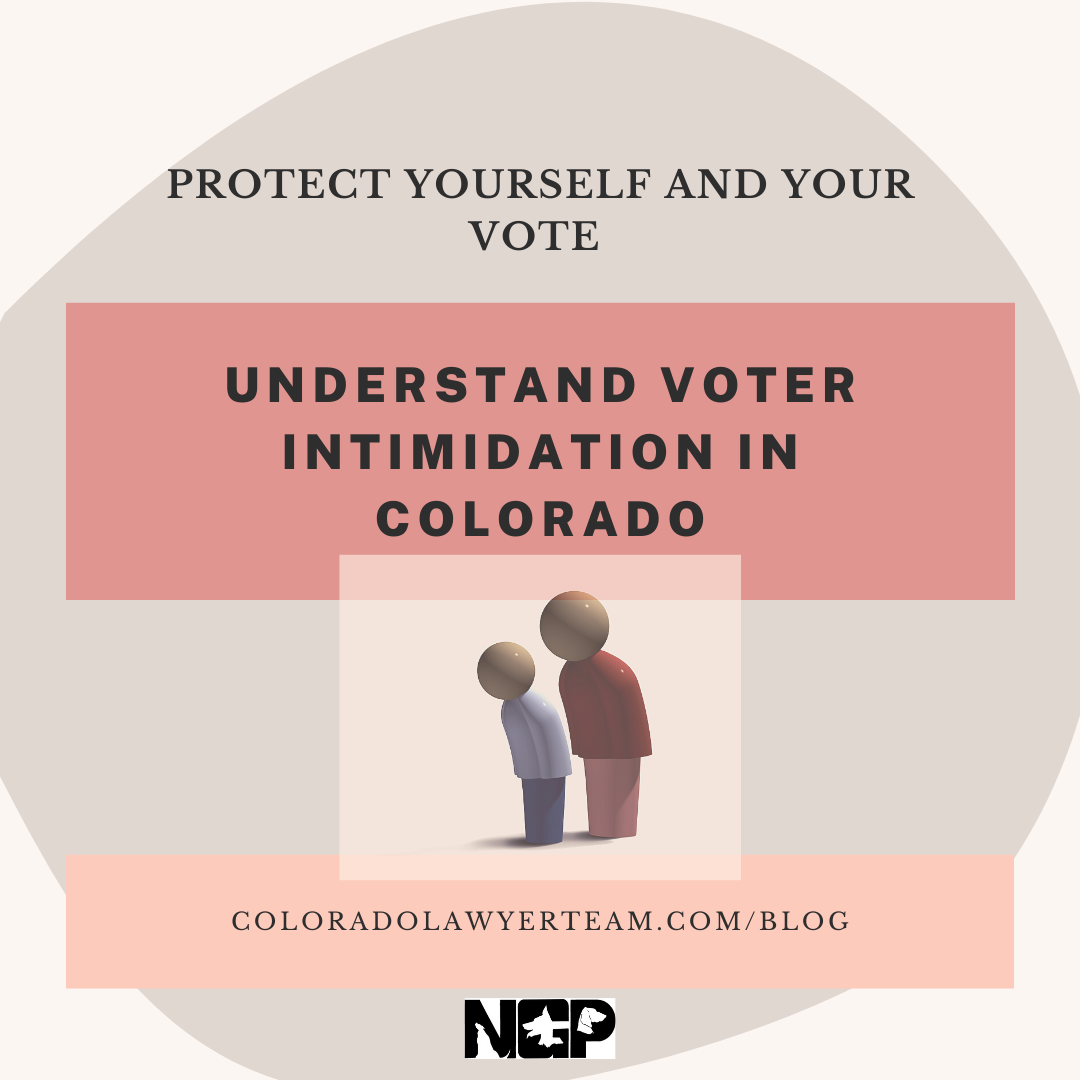 Intimidating a voter is considered a crime under both federal and Colorado law. In Colorado, voter intimidation occurs when a person directly or indirectly, alone or by another person on his or her behalf, interferes, impedes or prevents the free exercise of voting by any eligible voter. Voter intimidation can also occur if a person compels, induces, or pressures an eligible voter to vote, refrain from voting, or vote for or against a certain candidate or ballot initiative. It is a misdemeanor in Colorado to engage in voter intimidation and is punishable by a fine of up to $1000, or up to one year of imprisonment, or both.

Some Examples of Voter Intimidation

According to Colorado Attorney General, Phil Weiser, some examples of voter intimidation include:

This is not an exhaustive list of conduct that may constitute voter intimidation. If you believe someone has attempted to interfere with your or another person’s right to vote – either during in-person voting or otherwise – you are encouraged to report the conduct. You may report it to polling center election officials, local law enforcement, and the Colorado Attorney General’s Office.

Where Can Voter Intimidation Occur?

While we typically think of voter intimidation occurring inside or near the entrance to polling centers during in-person voting or during ballot drop-off, it may occur in a variety of places. For example, providing voters with false information about voting locations or identification requirements affecting voter eligibility can constitute illegal voter intimidation if done in an effort to influence how or whether a person votes. This could occur through misleading phone calls, email, and even text messages.

What about Campaigning/Electioneering Activities at the Polls?

A person may not campaign for a certain candidate or ballot measure inside a polling center, or within 100 feet of a building in which a polling center is located. Like voter intimidation, it is a misdemeanor in Colorado to engage in such campaigning activities (also known as electioneering activities). We previously explored the crime of electioneering in Part Two of our Colorado Election Crimes series. This kind of illegal activity could, among other things, be construed to interfere with your free exercise of your right to vote.

What is the Role of Poll Watchers?

This general election season, there is some confusion regarding poll watchers. Poll watchers are certified and sworn in by an election judge to observe certain election activities in a polling center. They are formally selected by a political party, an unaffiliated or write-in candidate, or issue committee, and must follow rules and laws specific to the poll watching role. Poll watchers are no different than anyone else in that they, too, are prohibited from intimidating voters. While some people believe that anyone can show up to the polls and claim to be a “poll watcher,” this is not the case. Rather, doing so could land a person in danger of violating voter intimidation and electioneering laws in Colorado, among others, depending on the person’s conduct.

Fortunately, in Colorado eligible voters also have the option to simply drop their mail ballots in the mail for delivery by the U.S. Postal Service. However, given that we are now only one week from election day, Colorado’s Secretary of State recommends dropping off mail ballots at a polling place or drop box location to ensure they are received by the November 3rd, 2020 deadline.