Understanding DUI charges in Colorado is critical as they are very serious and can have far-reaching consequences. If you’ve been charged with DUI, you need an experienced Colorado defense attorney who understands these charges and the related law. As spring appears on the horizon and social holidays such as St. Patrick’s Day draw near, opportunities leading to DUI can increase. We want you to know how DUI charges can impact your life and that we are here to help. 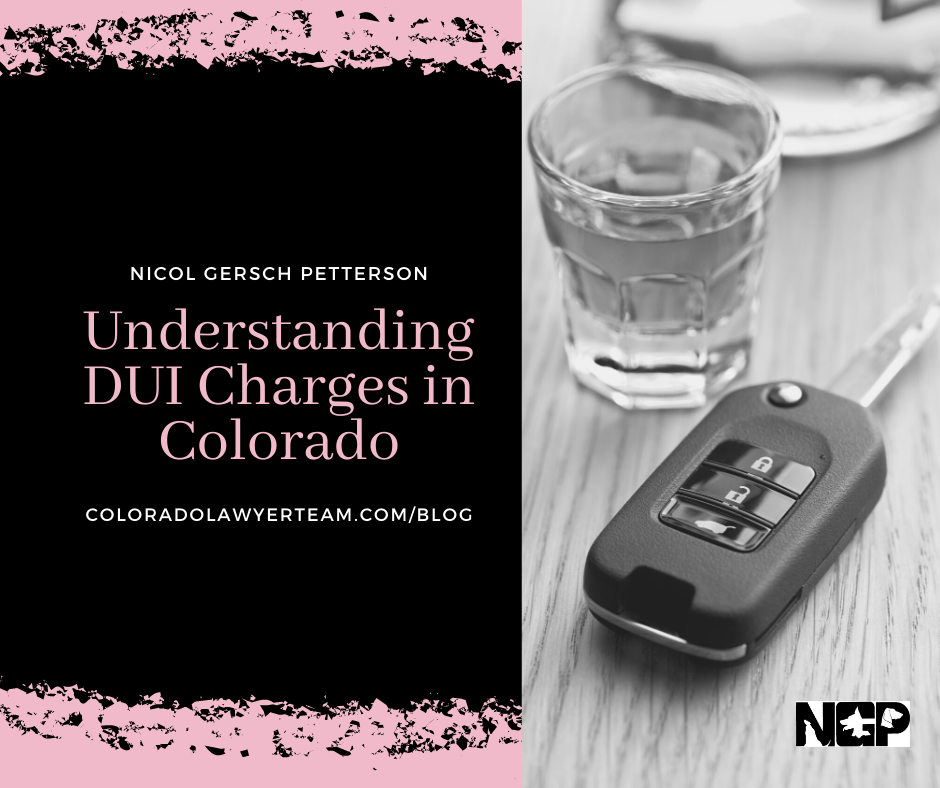 What are DUI Charges in Colorado?

Driving under the influence or “DUI” involves operating a motor vehicle while intoxicated by either alcohol or other drugs or both in combination. Colorado law defines DUI as occurring when individuals drive a motor vehicle after drinking or using drugs to the extent that such use renders them substantially incapable mentally or physically to exercise the appropriate level of judgment, control, and due care necessary to safely operating the vehicle.

A person can commit a DUI per se if he or she has a blood alcohol content or “BAC” of 0.08 percent or more within two hours of operating a motor vehicle.

A related charge is “DWAI” which is driving while ability impaired. This offense can occur if a person drives a motor vehicle after consuming alcohol or drugs and they are unable – even to the slightest degree – to mentally or physically operate the vehicle safely. A BAC between 0.05 percent and 0.08 percent can create a rebuttable presumption that the driver has committed DWAI.

A first-time DUI conviction can include the following penalties:

Penalties become increasingly harsher when individuals have one or more prior DUIs or related convictions. Such penalties may include longer jail terms, greater fines, longer drivers’ license suspensions, and mandatory installation of ignition interlock devices. You can learn more about second offense DUI charges and third offense DUI charges on our website.

Stops and Arrests Related to DUI Charges in Colorado

Police are on the lookout for drivers who may be impaired by alcohol and drugs while on the road. The police must have a reason to stop and pull over a driver. They will look for signs of impaired driving, which would typically include poor driving maneuvers. For example, failing to appropriately use your turning indicator, stay in your driving lane, and obey speed limits and traffic signs and signals could all land you in a traffic stop. The police can also justify pulling a driver over if there is anything appearing illegal about the vehicle. Here, illegal window tint, an expired registration, or inoperable lights on the vehicle could be cause for a stop by police.

Once stopped by police, police will approach the vehicle and driver. They will be looking for any signs of impairment of the driver, including slurred speech, bloodshot eyes, the smell of alcohol, and difficulty in retrieving the car registration, drivers’ license, and insurance documentation. Police are likely to be asking the driver a number of questions related to where the driver has been, where she is going to, and whether she has been drinking.

Based on these initial interactions and the resulting police assessment, police may ask a driver to step out of the vehicle and perform a variety of roadside field sobriety tests to demonstrate sobriety (or lack thereof). Some police may also carry and produce a portable breath test and offer the driver the option of taking the test. Both the roadside tests and portable breath tests are voluntary. Read more about these tests and mistakes to avoid during a stop here.

If someone is arrested for DUI, they are typically transported to the local police station or a detox facility. They will be administered a breathalyzer test if warranted and will be observed to ensure they are not ill. He or she may be kept in custody until their breathalyzer results are zero, at which time they may be released, or a sober individual may pick them up when permitted.

One survey found that the average cost of DUI charges is about $6500. But it’s not uncommon for the charges to result in $10,000 or more in fees and expenses, not to mention the potential for lost wages. Given the costs and harsh penalties that can result from DUI charges in Colorado, it’s important to contact an experienced Colorado DUI attorney if you are facing these charges.