A DUI in Colorado can be Costly

Everyone in Colorado has probably seen the billboards, heard the CDOT radio ads, or known someone with first-hand experience who can tell you just how costly getting a DUI can be.  Is it really $10K? Well, it depends… but the consequences of a DUI are wide-ranging and serious. Read on to find out more about what to expect from a DUI conviction. 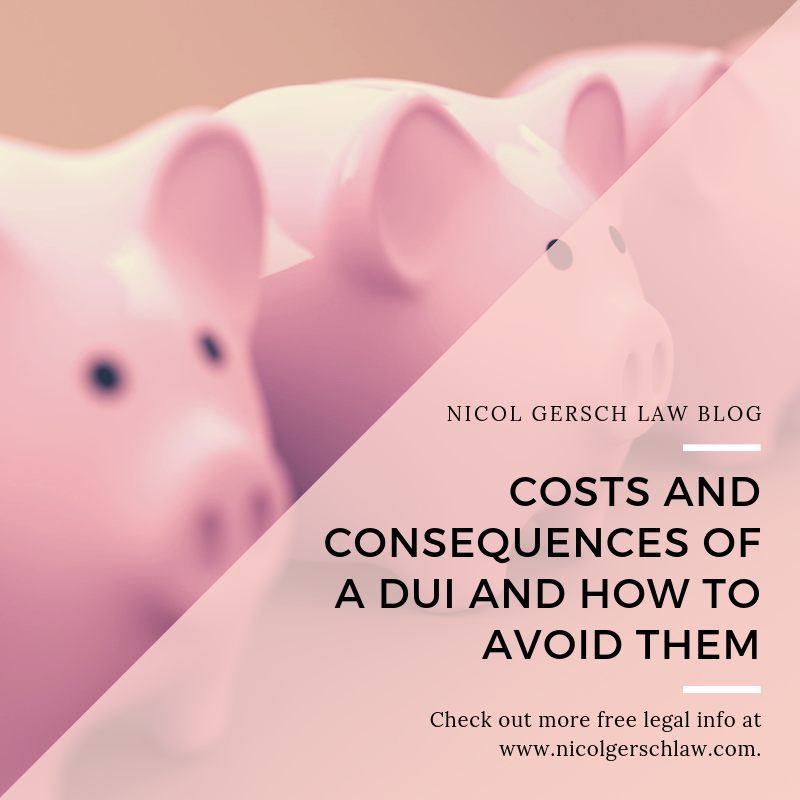 A DUI is an acronym for the crime of driving under the influence of alcohol or drugs (DUI-D, in the latter case; more on that over at last week’s post).  A DUI–regardless of the type–can mean jail, fines, and other criminal penalties. Beyond that, it can also affect you economically and socially.

You might not realize a DUI comes with a very real possibility of jail, even on first convictions. If it is your first DUI charge, though, you are more likely to face jail time if you were in an accident while impaired or exhibited extremely risky driving behavior. If it is your second DUI charge or you have a high BAC (blood alcohol content), there is mandatory jail time usually around ten days.  However, almost all DUI’s carry a possibility of jail or a suspended sentence for jail up to one year. Along with jail time you will likely be fined, up to $1,000 for your first offense and up to $1,500 on your second and third. A fourth DUI in Colorado becomes a felony.

Other consequences include monitored sobriety, license revocation, community service, substance abuse classes, and probation between 12-24 months – and you’ll have pay to pay for all of it.  Yep, you pay your probation officer for their services, usually about $50/month in supervision fees.  You also pay out of pocket for the UA’s or BA’s. You will also have to attend a MADD Victim Panel, in which victims, survivors, and others impacted by impaired drivers share their stories. Once again, you pay for the pleasure of the seat in the class.  Don’t even get us started on how expensive reinstating your revoked license can be, too.  Between paying your insurance company for the SR-22 and renting and servicing the interlock device for your car(s), some people prefer to just forego driving altogether. You’ll even have to pay to do your community service!

As you would expect, there are seemingly endless legal consequences for DUIs. What you might not have thought about before is how they will affect you socially and economically.

Other Economic Consequences for DUI

Facing a DUI charge can be very expensive, and goes far beyond the court-ordered legal fees. One survey found that across the country, the average cost of a DUI was around $6,500. This does not include lost wages due to missing work for court or jail time, however. Lost wages were reported at an average of $4,400 which brings the total cost of a DUI up to $10,900 on average. Of course, this number varies largely based on where you live. States such as California, Oregon, Washington, Colorado, Utah, and Alaska are some of the most expensive states to be convicted of a DUI, while states such as South Dakota, Vermont, and Mississippi are some of the least expensive.

The total costs of DUI include many factors. The largest expenses will be attorney’s fees, court-ordered fines, and car insurance increases. Other expenses are bail, towing and storage, substance abuse education courses, DMV fees, ignition interlock devices and urine and drug screenings. You may also face lost wages due to missing work for court, jail, or worst case scenario – losing your job due to your conviction.

Between the criminal and economic consequences of your conviction, it’s no surprise there are emotional and social consequences of a DUI. You will most likely face stress and anxiety due to the complexity of the process, in addition to stress from the financial obligations. You may also feel guilty because your actions, especially if others were injured or affected. Socially, you may have damaged many relationships personally and professionally, which are only aggravated if you ended up hurting someone in the context of your DUI. Personal relationships may feel strained if friends of family show that they are embarrassed or disappointed. Professional relationships may suffer as your reputation takes a hit – you may even find it is more difficult to find career or academic opportunities.

The consequences of a DUI seem endless, but it is a harsh reality for many people. The National Highway Traffic Safety Administration found that any given year, approximately 1.5 million people were arrested for driving under the influence of alcohol or drugs. That equates to 1 out of 121 drivers arrested for a DUI.

Not All Hope Is Lost

If you are facing a DUI charge, remember that many people have been in your situation. If you are struggling with substance abuse issues, consider seeking professional help or calling the Substance Abuse and Mental Health Services Administration free hotline at 1-800-662-HELP (4357). If you are in need of legal assistance, considering reaching out to Colorado Lawyer Team for a free 30-minute consultation. Find more information at  https://colawteam.com.

If you have done both of the things mentioned earlier–signed a letter and paid us–then, and only then, you might be a client. But merely chatting with us online does not a client make. Suffice it to say, if you aren’t absolutely certain about whether or not an attorney-client relationship exists between yourself and the firm, you should probably ask for some clarity. Until then, we’ll keep your secrets but we don’t formally represent you… YET.