How Returning to Work Is Affecting Moms

While working moms were hit hard by the start of the pandemic, the end won’t bring any more sympathy to moms separating their time between their jobs and their families. While both men and women struggle to return to the office this year, returning to work is sadly disproportionately affecting moms. 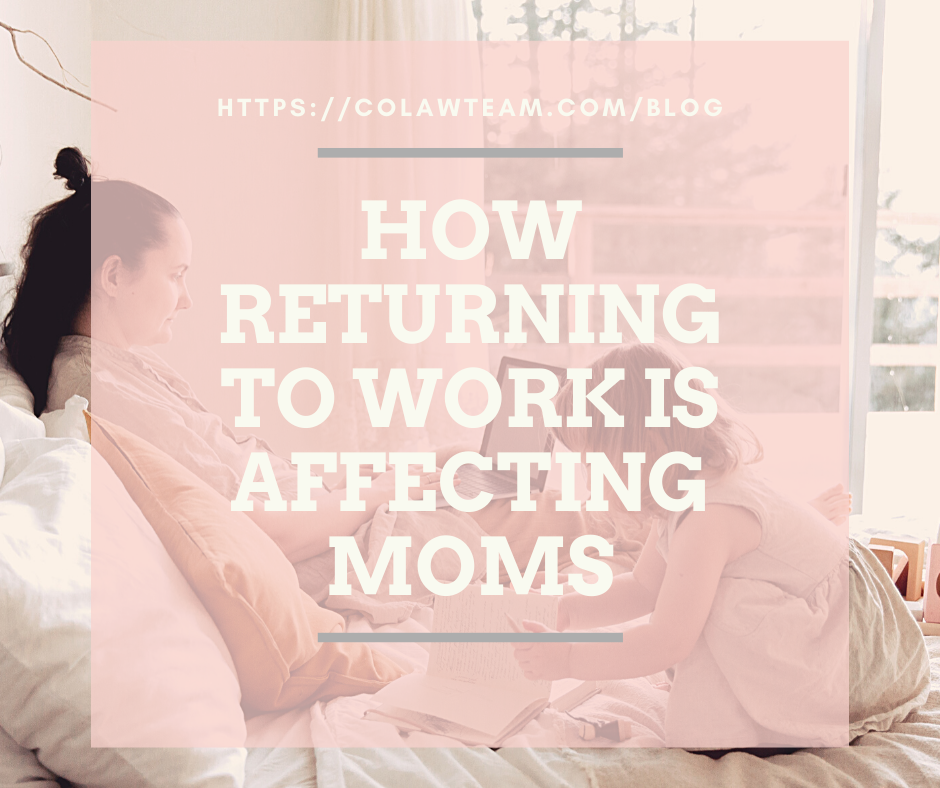 When COVID-19 hit hard in March of 2020, hundreds of thousands of children had to attend class remotely. Although students were largely affected by this, both working moms and non-working moms were also drastically affected. Nearly one third of all women in the workforce are working mothers, and they were thrown into the world of online learning while balancing a career.  Over the last year or so, the Labor Department has reported that almost 1.1 million women between ages 25 and 54 have left the workforce. If we account for the one-third of women who are working moms, we can average that nearly 366,000 moms were either forced or decided to leave the labor force.

It seems like many jobs expect moms to put their work before their children, and during times like these, working moms clearly indicated that they’d had enough. When children’s needs (safety, lunches, education, etc.) can’t be met by the school system, parents must make the decision to take care of their children, even when they’re needed at work. This new reality of time management, without a doubt, is hard, and the fact that it overwhelmingly affects mothers more than fathers is something that needs to be discussed these days.

Why society believes that women should be the ones to stay home over men is another story, but relevant to the issue. However, what’s even more salient during the pandemic is that more women have left the workforce than men. While 1.1 million women have left over the past year, nearly 830,000 men left over the same period of time. Although choosing your children over your work is a difficult decision, unfortunately, it’s one working moms seem to have made.

Do Some Moms Even Have Work to Return To?

With high-paying jobs, the transition from in-person to online work was stressful but still doable. Those with high-paying jobs also had a better chance for higher job security, meaning they were less likely to be laid off than fast food or retail workers. This sounds great in theory. However, before COVID-19, an analysis of 2018 American Community Survey Data showed that almost half of all working women (about 28 million) worked in low-paying jobs, with the median wage being $10.93 an hour. Low-wage jobs typically have less job security than high-paying jobs, but even some women in high salary careers were let go during the peak of the pandemic’s severity.

Even though COVID-19 is starting to seem like just a bad dream, the economy and labor market are still recovering from the devastating blows taken during the height of the pandemic. The biggest sector to begin rehiring employees has been the service sector, with positions open at salons, bars, restaurants, and medical offices. While this is great, this working sector doesn’t hold the largest percentage of female workers with children. In the Census Bureau’s 2018 national survey, they found that working moms made up 40% of educational services, health care, and social assistance. On the other hand, working moms only made up 8% of the entertainment, recreation, and food service jobs. This is a crucial reason that working moms are being disproportionately affected as they return to work: do they even have a job to come back to?

Returning to Work With a New Lifestyle

The pandemic has led many people to reflect on their lives, resulting in positive changes that better suit their lifestyles and mental health needs. The same can be said for working moms with children: women who either chose to take time off or were laid off found a new sense of reality as they helped their children with online school and took care of them at home. Hilary Berger, a career counselor and founder of the organization Work Like a Mother, notes that the workplace has been designed for the needs of men’s lives, not women’s. In this sense, men only have one role, the breadwinner who goes to a nine to five job every day, and nothing more. This reality doesn’t suit most working moms, who take on two roles as both a worker and a mother.

With this in mind, it’s easy to imagine that a mother’s return to work would be less graceful than a father’s. Although this struggle has grown worse since the pandemic began, it has also highlighted the discrimination that many mothers have faced in the workforce long before. A 2007 study looking into the careers of working moms found that 80% of women were met with greater financial hardship when rejoining the workforce. This was over ten years ago–not last year–making it painfully obvious that this has been a problem long before COVID-19 began. As more women rejoin the labor force, it’s time we reevaluate the roles that men have shaped in jobs that both men and women now pursue. Why should a particular career be more suited for men? Put simply, because they made it that way and don’t step away as often. Men, however, can step up and be allies for women and minorities, and actively try to recruit folks temporarily out of the workforce for a better position with more balance and more compassion.

The legal industry is likely one of the worst career paths in terms of being designed for men at the exclusion of women. It was only in 2010 that the number of female lawyers equaled half of the number of male lawyers in the United States. A 2018 study completed by the American Bar Association found that female lawyers are more likely to be mistaken for non-lawyers and be given more of the non-legal office work. They were also more likely to be criticized and punished for having too assertive of behavior, even though this trait is necessary to succeed in the legal field. This is something that could be discussed entirely on its own, and we’ll dive deeper into this topic next week in the second part of our blog posts on working moms. And, yes, we’ll reference that certain “upward mobility” article that got us all riled up about this topic in the first place.

So, What Does This All Mean?

While the pandemic has been hard on everyone, working moms have been disproportionally affected as they begin returning to work. From having to adjust to their children’s world of online school and developing a new way of life, to being unsure that they even have jobs to return to, the road ahead for working mothers seems daunting. Both COVID-19 and our society’s preconceived notions of what a worker in the labor force looks like have made this path even more difficult. Although the end of the pandemic is near, it won’t bring any more sympathy to working moms struggling to regain their footing in a forever-moving society.

If you are in need of criminal defense or family law help, consider reaching out to the Colorado Lawyer Team for a free 30-minute consultation. Find more information at https://CoLawTeam.com or call 970.670.0378.