Using Forensic Evidence in the Courtroom

Many of us will admit to watching the occasional crime show; after all, there are PLENTY of options. Between movies, TV shows, comedies, dramas, horrors, documentaries – our legal system is apparently very fascinating! However, the prevalence of these shows is actually having serious effects on the way jurors evaluate cases. The ‘CSI Effect’ describes how jurors expect “scientific” evidence to convict, and often desire the courtroom to be as dramatic as their favorite television show. This is often not the case, and can cause many problems for lawyers and defendants. Keep reading to learn about the different evidence that can be used in court, as well as the damages the CSI Effect can have on trials. 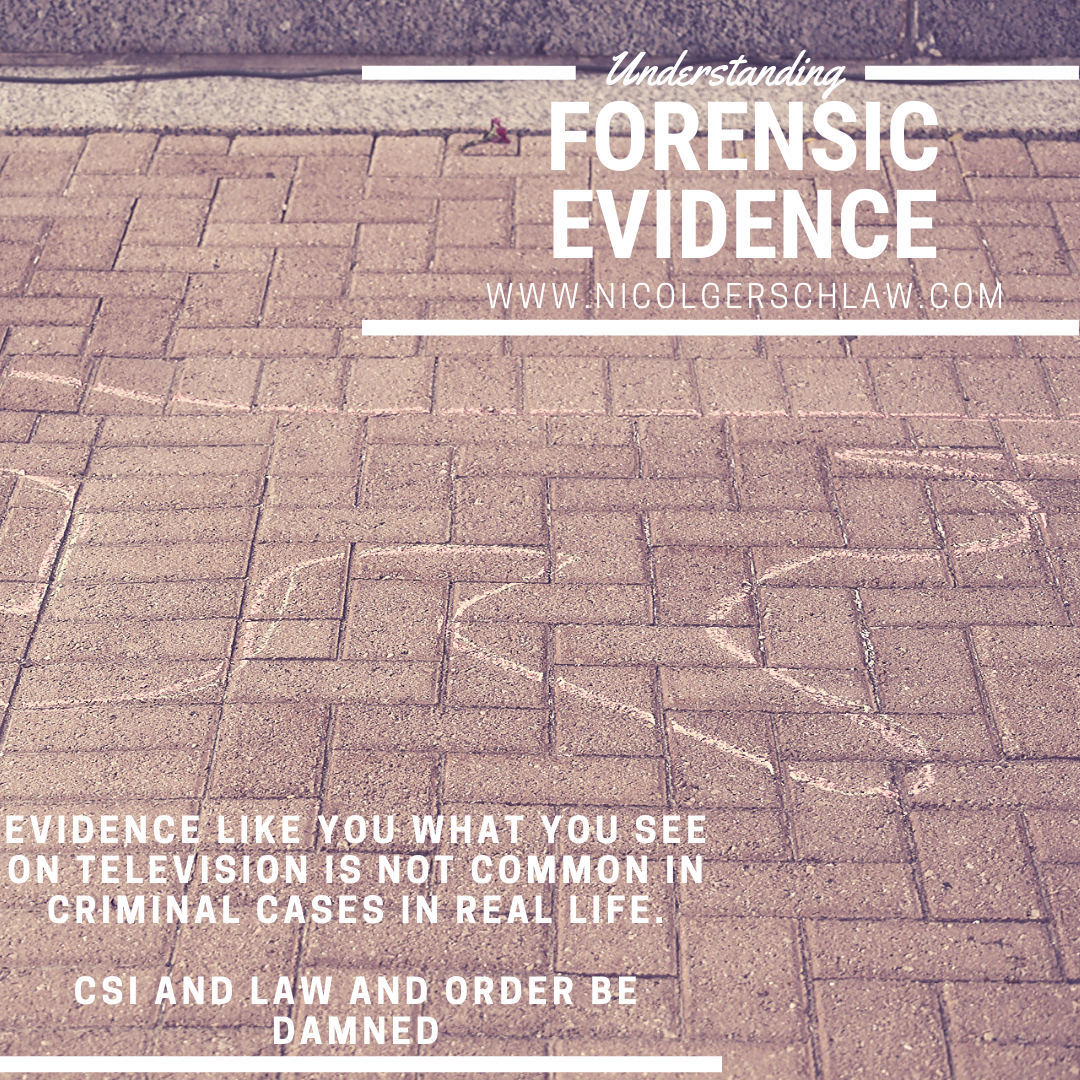 While it may not be as high-tech as other forensic evidence, fingerprint evidence is a popular tool in criminal investigations. It is based off the principle that every person has completely unique “friction ridge patterns” on their fingertips, and that they do not change over their lifetimes. The FBI stores millions of fingerprints that are on file for past crimes, certain occupations, or other reasons. However, fingerprints are not always accurate. Case in point, one of our attorneys was fingerprinted for a second state’s bar exam (we’ll let you guess which one), and a professional investigator in the the DA’s own office was not able to get valid prints from her despite multiple attempts due to “wrinkled fingertips.”  Only digital prints were sufficient. AND that’s for a professional in a controlled environment–makes you wonder about these “partial prints” lifted off of a questionable surface.

Some experts require 12 points in common to declare a match, while other may require up to 20 points. An important distinction between real life and TV is forensic evidence is almost never a “perfect match.” In real life, the evidence is often “similar” or a “most likely match” which means there is room for error. After all, lab technicians, evidence databases, and technology are not perfect. Another problem with fingerprint data is that it is nearly impossible to tell how old the print is. This means that the accused could have left a fingerprint before the crime was committed.

DNA Evidence is a favorite for crime shows! However, it is not nearly as perfect as portrayed on TV. Experts will compare an individual’s known DNA with a sample of DNA from a crime scene, and give an opinion on the likelihood of a match. Just as mentioned above, there is room for error in these opinions, as there is no way to determine a perfect match. The real issue here is that the science and technology in this process are extremely complex. Many police agencies do not have the funds for both the technology and the credible expert. And because of this, DNA “matches” can be inaccurate.

William Thompson, an attorney and criminology professor at the University of California Irvine found some terrifying results when looking at Houston PD. The Houston Police Department Crime Laboratory handles DNA evidence from over 500 cases per year, and yet, William Thompson concluded the police technicians were frequently misinterpreting basic samples. To read more about his research, see here. Many experts have concluded that DNA evidence is often misinterpreted due to its complex nature. If a defendant believes the prosecution is using flawed DNA evidence, it might be advisable to bring in a separate expert for a second opinion. However, bringing in an expert can be costly and might not be enough to sway a jury.

There are several niche forensic evidence frequently depicted on TV shows. These include blood spatter, bite marks, handwriting analysis, firearm and ballistics, and even identifying fibers from clothes or fabrics. These are often subject to the same errors as other forensic evidence. There could be issues collecting, preserving, handling, analyzing, or interpreting the evidence and can lead to a false conclusion. In some situations, expert testimony isn’t even required to go into this evidence (think: handwriting, voice analysis, etc.), and if a lay person says “it sounds like him” then that evidence is usually admissible!

Perhaps the most unreliable of evidence is eyewitness identification. The human memory is far from perfect and can be influenced by our doubts and suggestions from others. Other factors that can lead to misidentification are stress, the presence of a weapon, the presence of multiple perpetrators, and the pressure to choose. Research has also shown it is more difficult to identify someone who is a different race than you (implicit bias is a MAJOR problem with eyewitness ID’s in fact). Perhaps the most shocking, it that the confidence level of the eyewitness does not correlate to accuracy. In fact, confident eyewitnesses have been shown to have higher error rates. To uncover these errors, defendants can bring in a cognitive psychologist. These experts can identify factors that could have allowed for misidentification. However, these experts can be costly and few court systems have the funds to appoint these experts to every necessary case.

More About the CSI Effect

On TV shows, not only is there always DNA evidence found at the scene, but technicians have the technology and training to analyze it properly. Unfortunately, this isn’t the case in real life. And as we’ve discussed above, evidence used in trials can be far from perfect. This makes it extraordinarily difficult when jurors are under the impression that forensic evidence, particularly DNA evidence, is the only sure way to catch the right guy.

This can have negative effects for the prosecution and the defense, depending on the details of the case. For the prosecution, imagine a situation in which the defendant has motivation for the crime, no alibi, several eyewitness accounts, plus whatever other incriminating evidence you can think of. If there was no DNA or fingerprint evidence found at the scene, the jury might not convict despite the overwhelming guilty evidence. On the flip side, imagine a defendant who has a clear cut alibi, no motivation for the crime, and yet his DNA was mistakenly identified at the scene. The jury could convict based on DNA evidence alone, and the citizen could serve time for a crime he did not commit.

Overall, jurors’ faith in DNA evidence alone can compromise the accuracy of our justice system. While crime shows are entertaining, we must remember not to take their ideas into the real-life courtroom.

Need Help With Your Case?

If you need help with a criminal case, consider reaching out to Colorado Lawyer Team for a free 30-minute consultation. Find more information at https://NicolGerschLaw.Com or call 970.670.0378.