What You Need to Know About Monitored Sobriety

Monitored Sobriety – Lightyears Beyond Antabuse But Far From Best Practices

If you’ve been charged with a DUI or any other offense involving alcohol or drugs, you will most likely undergo monitored sobriety. You will typically be monitored from the start of your probation period through any education or therapy you have been assigned. However, you may also be monitored prior to the conviction entering as a condition of any bond that you post to be released from jail.  There are a variety of tests you may be asked to take, and all of them come with their own unique issues. Read more to find out about different monitored sobriety tests, and what you should know about each of them. 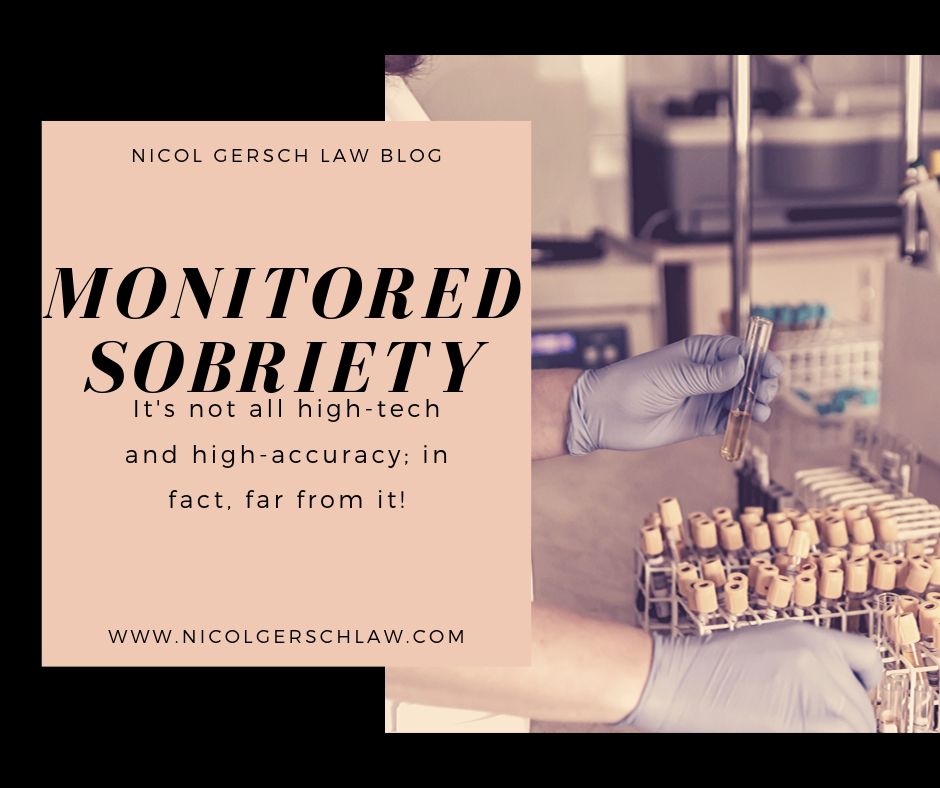 The most simple, cheapest way to monitor sobriety is through BAs. You will typically be asked to take a test 2-5 times per week, and each test runs from $1.25 – $2.00 in Colorado. This is much cheaper than other forms of testing. However, they aren’t used as often because they are easy to “cheat” around. Most people figure out they can simply time their alcohol consumption around their test and still pass. However, they are occasionally given randomly, where you’ll have to call in to find out whether you are being tested or not. Another issue is if the timing is right they can pick up on other substances such as mouthwash and tobacco and produce a false high reading.

One of the most common, and least accurate, sobriety tests is the UA. They are inaccurate so often that they are not reliable for the initial DUI test, but are still used for probation revocations and pretrial monitoring. Why? Because they’re cheap – and yes, you get what you pay for. For starters, your urine sample can sit around for some time before they actually get to testing. The sample can start to decompose and come up with a false high reading. Additionally, a UA only measures the alcohol content in your bladder, which doesn’t always match the alcohol content in your blood. If you had a few drinks hours ago, but haven’t went to the bathroom since, a UA can read a high alcohol content even if you are not drunk. On the other hand, if you drank heavily in the past 15 minutes but it hasn’t reached your bladder yet, a UA will not detect any alcohol whatsoever. UAs have many issues but are relatively cheap at around $17 per test. In most cases, although the level itself cannot be trusted, a positive or a negative result is all that’s being looked for.  Any alcohol or drug use whatsoever will cause a positive result, thereby getting you in trouble for violating your bond and/or probation conditions.

UAs also harder to cheat than BAs. You are watched while you urinate to ensure you aren’t using borrowed or synthetic urine. Your sample is also tested for temperature, whether it has been diluted, or whether it is synthetic. It’s best not to try and cheat the system – if any of these attempts are determined to be present it constitutes an automatic fail. Another safeguard against cheating is that UAs are often given randomly, and you’ll have to call in to find out whether you’ll test or not. This eliminates the issue of timing your drinking around test-taking. All of these protections against cheating is why you might be asked to take a UA as opposed to another monitored sobriety test, even though they are widely known to be unreliable.

There are different types of UAs for alcohol and drug testing. You could be asked to take both. Here is what to know about each:

You will be asked to take a UA for drug testing if your DUI was drug-related (called DUI-Ds, learn more about them at our blog post here). You might also be asked to take them occasionally if your DUI was only alcohol-related to make sure you aren’t cheating the system. They come in the forms of a 7-panel test, 8-panel test, or 10-panel test, regarding how many substances they test for. The 7-panel test tests for THC, Amphetamines, Cocaine, MDMA, Opiates, Heroin, and PCP. Your first test will be a “Baseline test” and they will compare all other tests to this original in order to ensure your levels are decreasing over time.  If you smoked MJ, for example, the week prior to your first test, you’ll be positive for marijuana, but maybe not under any court order not to consume it at the time you did so.  By getting a baseline at that first test, if your levels subsequently go up and do not eventually taper off to zero, your PO or Pretrial Supervisor will know you’re using again/still. One important thing to note is that medical marijuana is not allowed and will cause you to fail – yes, even in Colorado, and yes, even if it is a prescription for a legitimate medical issue.

A UA test for alcohol is called an ETG. It monitors ethyl glucuronide (EtG), which is formed by your liver after exposure to alcohol. It will detect alcohol use for up to 48 hours (or longer, for heavy use) after you have been drinking, and can detect extremely low doses. The issue was this is that is often picks up on incidental exposure, such as through mouthwash, tobacco, or certain foods. And the test does not report alcohol levels, it’s only a pass/fail, meaning you can fail for something as innocent as using mouthwash.

One of the newest, most accurate, and most expensive sobriety testing is the SCRAM unit. It stands for Secure Continuous Remote Alcohol Monitoring, and provides 24/7 testing.  It is often assigned to people who are at high risk for another DUI charge or who are a risk to public safety in the court’s eyes but can also be assigned if you have previously failed other testing. You could be asked to wear it from 60 days, up to a full year. It is a monitor placed around your ankle that detects alcohol levels in your perspiration every 30 minutes. It’s very accurate, and only has a false positive reading of 0.074% per every 12 hour period. The issue with SCRAM tests is they can be ridiculously expensive. Installation can cost up to $100, with a daily monitoring fee from $10 – $15. That means you could potentially pay up to $450 per month to wear it.

Not really a form of sobriety testing, but instead a method to reduce alcohol consumption. Antabuse (or similar medications) causes an unpleasant reaction when mixed with alcohol, such as fast heartbeat, chest pain, nausea, dizziness, and thirst. It is designed to make you want to stop drinking and is often prescribed in addition to monitored sobriety tests.  Courts generally do not order Antabuse testing, but your defense team may suggest medical monitoring of severe addiction cases with the use of Rx drugs to minimize the need for the illicit substances.

Monitored sobriety is unpleasant no matter how you look at it. It can be inaccurate, expensive, and feel like an invasion of privacy. If you are in need of legal assistance, consider reaching out to Colorado Lawyer Team for a free 30-minute consultation. Find more information at https://colawteam.com or just call 970.670.0738 any time.