A Thank You Letter, To The Notorious R.B.G

As an all-women law firm, Ruth Bader Ginsburg has been one of the most inspirational forces for each of us. When The Notorious R.B.G graduated from Columbia Law School at the top of her class, she still found difficulty obtaining employment after graduation. It is not lost on us that social progress made since has allowed us, a team of three women, to own our own law firm. Of course, some of this progress has been paved by Ruth Bader Ginsburg herself. 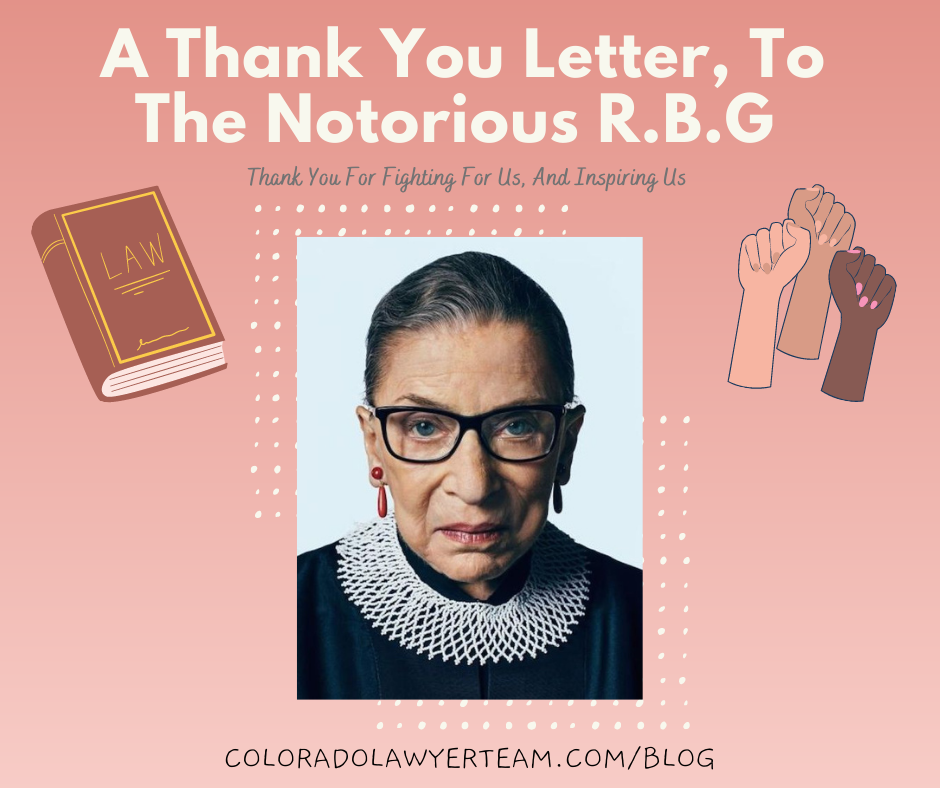 In 1972, Ruth Bader Ginsburg co-founded the Women’s Rights Project at the American Civil Liberties Union (ACLU). This organization had participated in more than 300 gender discrimination cases by 1974. As the director of this project, R.B.G argued six gender discrimination cases before the Supreme Court between 1973 and 1976, and won five of them. She has wrote countless books and publications on the topic of gender equality. And, while serving as a justice on the United States Supreme Court, she consistently sided with gender equality in applicable cases. Ginsburg was not only a feminist icon, but fought passionately for the LGBT community, undocumented citizens, and disabled people. We simply could not list all of the accomplishments that Ginsburg has made for women and disadvantaged groups in an article this short. Throughout her entire career, she has been actively fighting for equality – and most of the time, winning.

Not only has R.B.G made great strides for equality for everyday citizens, but she has also specifically advanced equality in the legal field. She was the first person on both the Harvard and Columbia Law Review, she fought for equal pay for herself and her fellow professors, she became the first tenured women at Columbia Law School, and co-authored the first law school casebook on sex discrimination. R.B.G has “broken the glass ceiling” many times during her career, and has helped paved the way for other females and minorities in the legal field. Unfortunately, these are all too often fights we still find ourselves fighting on a daily basis.  Mysoginistic tendencies in law practice are all too common these days, still, and our alma mater at the University of Denver is no stranger to pay discrepancies for female law professors having settled an EEOC complaint in recent years and continuing to battle with female and minority faculty about what constitutes fair pay. What we’ve learned is that this is always a fight worth fighting, and we’re proud to be an inspiration for the next generation of female lawyers through our work in the legal industry and our communities at large.

Ruth Bader Ginsburg has inspired us with her courage, perseverance, tenacity, and continued fight for equal rights. She has inspired us to become the lawyers we are today. More importantly, she helped pave the way that even allowed us to become lawyers in the first place. Her death was truly an event that shook our whole team. We carry on her legacy through our tenacity in the courtroom, and our own efforts to fight for equal rights for minority and disadvantaged groups. As working mothers and women who have experienced outright discrimination and harassment due to our sex, we know how difficult and tiring it can be to keep on fighting. We’re here to tell you: we’ll keep fighting for you. Don’t give up. RBG wouldn’t want that.

Ruth Bader Ginsburg: Rest in peace, and may her memory be a blessing.