Although economic crime isn’t often discussed in the media, in reality, there are many types of financial cases we as attorneys see. Whether people see these financial crimes from the outside looking in, or they are caught in an economic crimes case themselves, it’s an intricate and fascinating field to navigate. This is the second blog post surrounding the U.S. economy in the COVID era. To see the first, you can check it out here. 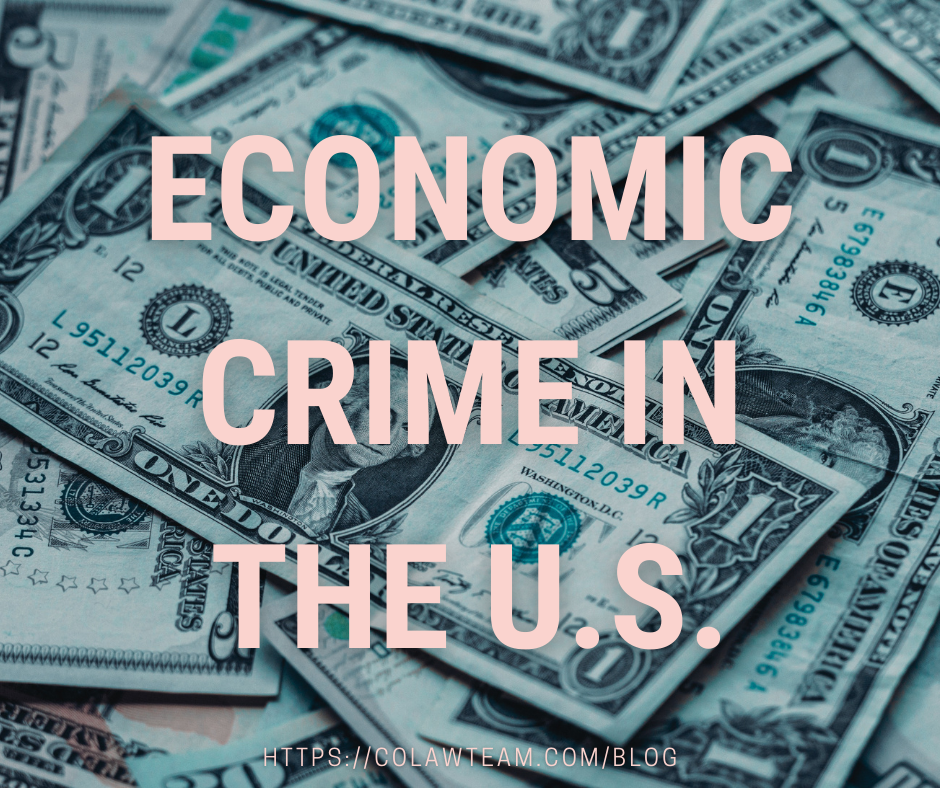 Economic Crime: What is It?

So, what exactly is economic crime? It has a broad definition but is generally defined as a non-violent crime involving monetary loss. Examples include:

Embezzlement occurs when funds that were lawfully entrusted to a person are misused and used for unintended purposes. Those who embezzle may create fake receipts and bills for their spending to cover up the fact that the money is going somewhere completely different. An example of embezzlement is a Ponzi scheme. Similar to a pyramid scheme, investors attract new investors to a company with the promise of high rates of return and little risk involved, when in actuality, the earlier investors make all the money and leave the new ones with nothing. Embezzlement can also be taken up in both civil and criminal court. Yes, there’s a possibility of being convicted of the criminal case and also being found civilly liable for the damages (think OJ Simpson, if you must).

Tax fraud is a large umbrella that encompasses many different types of economic crimes, including but not limited to: corporate fraud, money laundering, and tax evasion. Corporate fraud is very complex, but largely deals with deception within corporations about the financial condition of the company and is aimed at figures like investors and auditors. Money laundering involves criminals who make it seem like their money has come from legitimate, trustworthy sources through the use of concealment or disguise. As the FBI describes it simply, money laundering turns “‘dirty’ money into ‘clean’ money,” and the money can be taken from different acts such as terrorism, trafficking, and health care fraud. Lastly, tax evasion, put simply, is illegally avoiding paying your taxes. This can be done by either not paying them altogether, or underpaying. It’s important to note that tax evasion is deliberate, not accidental.

Perhaps the most common type of economic crime we see these days is employee theft. Whether it’s petty cash going missing, or cooking the books for years, employees have access to huge amounts of capital from their employers. Employee theft–even mere allegations of employee theft–have the possibility of not only exposing someone to the criminal justice system but also potentially wrecking their careers faster than just about any other type of offense (save, murder or something heinous). Regardless, an attorney who understands the “financial aspects” of life is important for these kinds of cases. Here at Colorado Lawyer Team, we have not one but two such folks with advanced business and accounting degrees who practice in this area of criminal defense.

In a 2014 profile of an internal fraudster (meaning within the organization), the average fraudster was described as male, between the ages of roughly 30 and 40, has been working at the company for more than six years, and has received at least a bachelor’s degree.  That being said, many of our clients are actually women who have been on the brunt end of employers pointing fingers for money mishandling. Economic crime is considered white-collar crime, which is financial, nonviolent crime. This term involves “white collar,” which references the type of work done in an office or professional environment by people who are highly skilled and have on average higher salaries. This isn’t to say that economic and financial crimes don’t occur elsewhere, but the first thought that comes to mind when people hear about these types of crimes are large corporations, Wall Street, and high profile, public figures.

From a legal standpoint, there are some important things to know if you have been accused of committing an economic crime. These crimes are no joke, and it’s important to have expert legal advice and representation if you want to have a chance at being successful in your case. As it goes with any case, the first thing you should do is contact your attorney to discuss next steps. Don’t share the facts of your case, and don’t try to make a run for it. The FBI has been investigating each type of crime listed above for decades, and no matter how long it takes, they will likely catch you.

Another key piece of information to be aware of is that you can be charged as a marital couple, but even though you are co-defendants, you both need your own attorneys. The only case where this is not necessary is when criminal cases are joined, which can save clients money on their joint defense, but which is often hotly contested by prosecutors.

As mentioned earlier, economic crimes cases can be tried as either civil or criminal cases. You’ll need attorneys for both as the rules are very different.  When brought forth in a civil case, the victim will seek damages, likely in the form of financial payment. However, in a criminal case, you won’t be going against the victim but rather the state or federal government, and the punishment will be the possibility of a prison sentence with court-ordered restitution rather than financial damages. Either way, it’s important to have an experienced attorney who can help you navigate the law, your accusations, and the best course of action with regard to your specific situation.

Overall, economic crimes are very complex, high stakes crimes that have been investigated by the FBI, the IRS, and other organizations for decades. With the development of technology, crimes like intellectual property theft and identity theft have grown more common. Crimes like embezzlement, theft, and tax fraud have remained pressing issues in the United States, with more specific forms including Ponzi and pyramid schemes, money laundering, and corporate fraud. If you find yourself caught in the middle of an economic crime case, it’s important to seek legal help in order to avoid making mistakes like giving away vital information about your case or even trying to run away altogether. Although it is a difficult field to navigate due to its intricacies and nuanced issues, the team at Colorado Lawyer Team is here to help you.

If you are in need of criminal defense or family law help (and yeah, we do some animal law things outside of criminal defense and family law, too) consider reaching out to Colorado Lawyer Team for a free 30-minute consultation. Find more information at https://CoLawTeam.com or call 970.670.0378.