All About Juries: Selection, Nullification, & Tampering

The 6th Amendment guarantees your right to a trial by jury. If you’ve ever had to go through a trial, you know just how important a jury is. It’s worth knowing the details of how your jury is selected, and other situations you may encounter – or at the very least, see on TV. 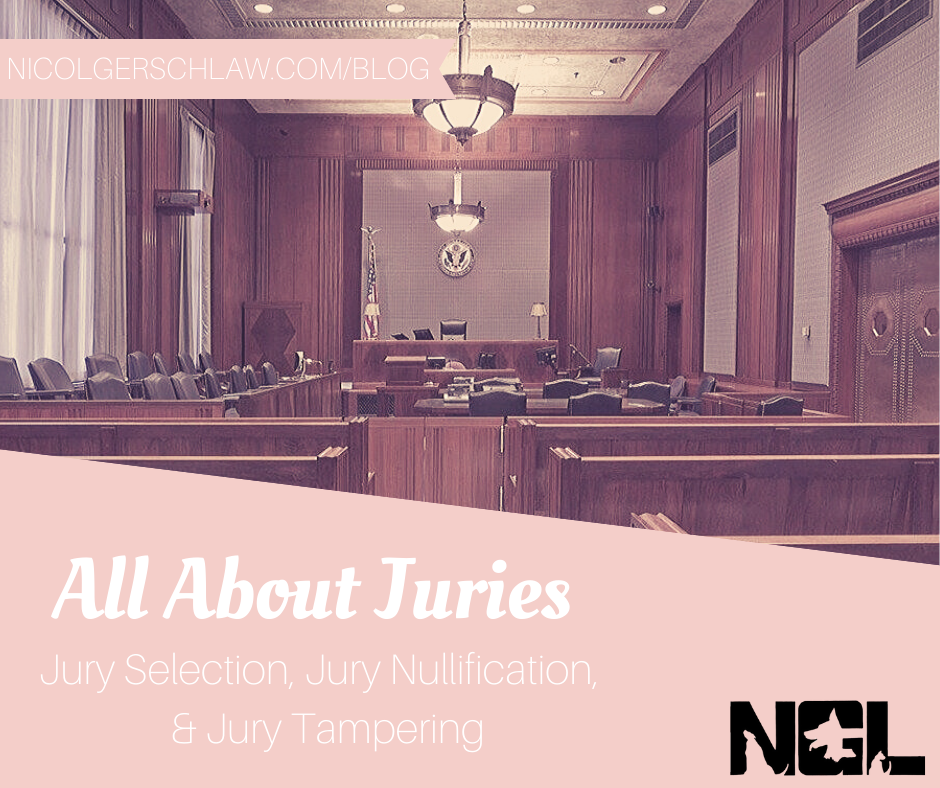 Attorneys and judges select jurors through a process called “voir dire,” which is Latin for “to speak the truth”. Judges and lawyers ask potential jurors questions to determine if they are suitable for the case. First, they’ll ask questions to verify they are legally able to serve on the jury, and that their service would not cause excessive hardship. An example could be someone who is the sole caretaker off an elderly family member, a student who might miss critical exams, or out of state travel booked and planned already, etc.

Next, the lawyers will ask potential jurors about their backgrounds, and any pre-existing knowledge about the case they might have. This is a big deal because lawyers would not want someone to serve on the jury that has a bias against the case. For example, the attorney of someone accused of a DUI, would not want a juror whose family member had died in a drunk driving accident. Similarly, the prosecutor would not want to pick a juror who has previously been charged with a DUI or has had negative experiences in the criminal justice system. There are two types of bias that a juror can be excused for – actual and implied. Actual bias is for when jurors admit they wouldn’t be impartial, such as if their religion prohibits them from judging others. Implied bias is based on character or personal experiences that would make it unlikely for them to be impartial. Overall, both the prosecution and defense are seeking neutral, un-biased jurors.

When lawyers use a peremptory challenge to dismiss a potential juror, they do not have to provide a reason. Often times it is to dismiss jurors who appear likely to favor the opposing party. Lawyers only have a specified number of peremptory challenges available, and that number depends on the type of case, such as a misdemeanor, felony, or death penalty trial. The only reason a juror could not be excluded is based on race alone (without also providing a race/gender-neutral reason after a Batson challenge at the bench). Before lawyers have to use their peremptory challenges, they are able to challenge jurors “for cause.” The prosecution and defense have the option to challenge a potential juror, and if the judge agrees, the juror will be struck from the jury panel. There are no limits to the number of challenges for cause, but there are restrictions on the number of peremptory challenges. Sometimes, judges will strike jurors for cause without even consulting with either side and simply ask afterward if there are any objections to removing the juror. More often than not, these are very clear cut cases of unqualified jurors on the panel.  Jury selection is a big deal because if errors are made in the process, it could be enough for an appeal in criminal cases.

If you’re a fan of lawyer or cop shows, you have probably heard of jury nullification. While it’s a dramatic topic on TV, it isn’t very prevalent in real life. This is because many judges forbid even the mention of it in the courtroom. Additionally, advocates of jury nullification have been arrested for passing out information near courtrooms.

Jury nullification is when a trial jury reaches a verdict because they disagree with the law itself, or believe the law shouldn’t be applied to this specific case. It’s no wonder the mention of jury nullification is hushed in courtrooms – there could be airtight evidence that a defendant is guilty, and the jury could still vote not to convict. And because of the 5th amendment right against double jeopardy, the defendant could not be tried for the same crime again. Jury nullification is legal according to the Supreme Court,  and there are also rules in place that prevent a juror for being punished for their verdict, even if they reached it improperly. But the system is not built on nullification, as much as most defense attorneys would argue otherwise. It is frankly discouraged and jurors are ALWAYS instructed to follow the law.

When Would Jury Nullification Occur?

Historically, jury nullification was prevalent during the prohibition era. Jurors would acquit defendants who had been caught red-handed smuggling alcohol, simply because they disagreed with the premise that alcohol should be illegal. However, jury nullification can also go the other way, where jurors convict defendants when there is not enough evidence. Historically, this occurred when all white jurors would convict black defendants despite minimal evidence. In the modern-day, jury nullification is most common in drug cases. In these situations, jurors have refused to convict on drug possession charges because they feel these drugs should be legalized, or because they feel drug laws discriminate against certain groups.

Jury tampering is the crime of improperly influencing jurors. This could be extreme such as bribing or threatening a juror to decide a certain way. It could also be more subtle influences, such as leaving notes, or communicating information that has been excluded from trial.  Jurors can also commit misconduct such as discussing the case with someone outside of the courtroom. Juror misconduct might get a juror dismissed, but generally is not a crime. If a juror has been influenced by outside information, such as through jury tampering or jury misconduct, the judge might declare a mistrial. This would grant the defendant a new trial.  However, it is often difficult to prove a juror has been illegally influenced.

Your right to trial by jury is important. If you have any questions about this right or need legal help, consider reaching out to Colorado Lawyer Team for a free 30-minute consultation. Find more information at https://NicolGerschLaw.Com or call 970.670.0378.